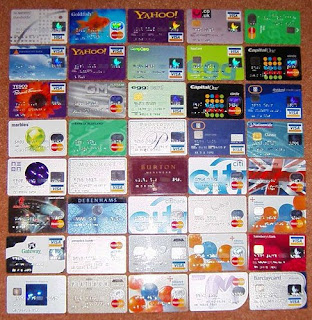 Two days ago I was at the supermarket where my credit card *didn't work*. The cashier said I had a "contact issue".

Then, later on my card didn't work at the gas station either.

So I pulled away from the pump and dialed Chase.

Apparently, my wife forgot to pay the bill due on June 25th. We happened to be away on vacation that week and the bill either didn't show or was lost. No big deal, right?

So I was already screaming at the customer service rep when she said it's always been their policy to *turn off* delinquent card holders.

That only made me more irate. I told her I'd had the card for 12 years and missed many a payment without them ever revoking my credit so she was full of sh*t.

CaptiousNut - It must be some new policy or something.

CustomerServiceStooge - No. It's not. It's been that way ever since I've been here.

CaptiousNut - How long have you been there?

CaptiousNut - Well I've had the card since 1997....It's never been *turned off* before. You need to turn my card back on right now or I'll never use it again.

Of course she couldn't. Like a knucklehead I demanded a *supervisor* who fed me some more BS - that they couldn't turn it on without a payment, that it had ALWAYS been their policy.

Fine I said. I got her name and told her not only would I never use the card again, that I'll use one of my other cards for everything henceforth....AND, for pure spite I may decide to not pay it at all and make them eat the 10 grand (2 months) balance.

Now there's no way I'd do that. As I said, I acted like a knucklehead but only because I was that PO'ed.

I have no problems paying the penalties and interest for a missed payment. But to turning the card off on a customer who's paid their bills for 12 years?

My wife called up to yell at them as well. And get this, when complaining about them turning off our card without warning....they dropped this bombshell on Mrs. C-Nut:

No bleepin' crap it is. When the heck did the credit card industry finally realize that?!?!?!

So while today they are irrationally clamping down on creditworthy folk like myself....

Over the past several years, they let people like my Moronic landlord run up hundreds of thousands in debt on a dozen or so cards.

Just yesterday in the mail I could see a letter to him from one such company. Through the envelope it was easy to see his debt of just over $49,000.

But gosh darnit, the next card in my line-up is from Bank of America's MBNA....so that wanker Ken Lewis is going to make out on this.
Posted by CaptiousNut at 8:18 PM

Have you figured out any good, non-inconvenient non-TARP banking solutions? I am trying to switch away from SchittyBank as I am tired of feeding the Federal Bank Monster. Don't want to be a part of it anymore than I want to pay my taxes, but I figure no one is going to come kill me if I stop using SchittyBank (not yet, anyhow).

Help a brotha out if you got any smooth ideas!

Just don't have your money at the *last* bank to fail.

BAC and C depositers will just have their money *printed* directly for them.

Hmmm...my June statement from Chase got "lost in the mail" too. A coincidence? When it does actually make it here, it's usually 3 days before the due date.

My other card's statement now comes in a different shape envelope every month. I am guessing that is is so I'll inadvertently throw it away thinking that it is one of the 50 unsolicited credit card offers I get each week.

Bill lost in the mail?
Forgot to pay on time?
Carrying a balance [of $10K]?

So you super finance savvy dudes don't:
- use email notification
- use finance software that helps you track what's due and when
- pay off your credit cards in full each month

Alright, so Chase isn't the smartest outfit in the world.

But it still looks to me like you're going to have to start marginalizing yourself ...

Not carrying a balance.

Run about 4-5k a month but pay off every cycle.

So the 10k bill was 2 months of cumulative debt. Get it?

I may Marginalize my wife for losing the bill. She handles that stuff.

I don't carry a balance.

I don't need an email or financial software to remember that Chase bill is due on the 15th of the month.

And I prefer they mail me a printed copy of my statement rather than waste my time, paper and toner printing it from their online site.

I am merely accusing Chase of intentionally forgetting to send out statements with the hope of catching a few dopes who are asleep at the wheel...