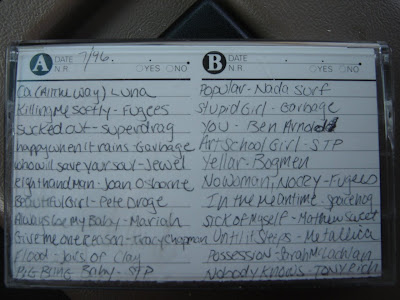 After only 40 minutes of sleep last night, I was pretty groggy on my drive to the golf course this morning.

But I did notice something awry with the never-ever-used cassette deck in my wife's car - a 2000 Ford Explorer.

At 5:42 am, inhaling breakfast while I waited for the cart man to arrive, much to my surprise I came across a pack of Marlboro Lights in the car. Now my wife used to smoke, but was forced to quit some 8-9 years ago. This was her old brand for sure. There was only one cigarette missing so this was clearly a *late night*, nostalgic indulgence. I had a good chuckle and tried unsuccessfully to figure out the last time she was *out*.

Then I had a GREAT chuckle after hitting the eject button on the dusty cassette player.

How pathetic is that!

After face-to-face mockery and some probing I realized, even if she didn't, that it twas that friend of ours' 40th birthday party the other night that sent 'old bag' shudders running up my wife's spine.

Plus, apparently the young'uns she works with have been ribbing her about being *out* in general. They thought it hysterical - and unheard of - for Mrs. C-Nut to have just learned who won American Idol. And supposedly there was another recent incident where she pitifully tried to sing the lyrics of some current Top-40 bubble tune at work....which made her minions keel over laughing.

So who exactly is this woman I courted and procreated with?

Perhaps one of y'all can psycho-analyze her pre-C-Nut musical tastes for me.

It only gets worse pal...until some youngster starts calling you a "napper".

You're still alive and kicking?

I thought you had left us, OR, at least been exiled to the DNR House!

i just randomly came across this blog and saw this mixtape picture and i had to comment because it looks so AWESOME, and exactly like one of the many mixtapes that i had made back then. literally. wooo your wife is cool!