Some radio dj pranks a poor nutjob of a woman in Alabama, informing her that her Social Security checks will be reduced.

The best part may be that this woman has been a *repeat victim*!

I also like this jest that came from the Private Caller clan today:

A fifteen year old Amish boy and his father were in a mall. They were amazed by almost everything they saw, but especially by two shiny, silver walls that could move apart and then slide back together again.

The boy asked, "What is this Father?"

The father (never having seen an elevator) responded, "Son, I have never seen anything like this in my life, I don't know what it is."

They continued to watch until it reached the last number, and then the numbers began to light in the reverse order.

Finally the walls opened up again and a gorgeous 24-year-old blond stepped out.

The father, not taking his eyes off the young woman, said quietly to his son.....

"Go get your mother."

Lastly, check out the following pic: 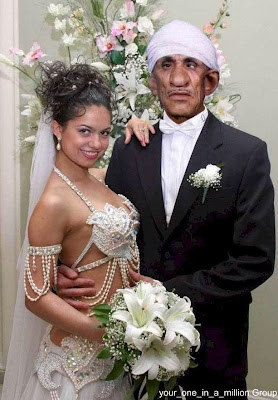 I received that in a stream of 3 pics titled - How to spot a millionaire.

Another of the pics was this one which I posted in a blog many years ago.

The third pic I can't post on account of unclad genitalia. Let's just say there was a vertically-challenged dude and a lanky, buxom blonde hand-in-hand.
Posted by CaptiousNut at 12:10 PM