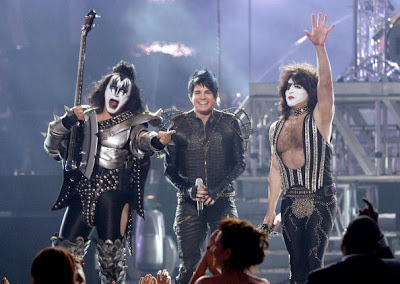 My wife is in the process of watching this season's American Idol. Even though the show concluded 1.5 months ago, Mrs. C-Nut still hasn't a clue who won.

Just yesterday she made it far enough through our DVR recordings to discover that I had been messing with her.

For some time now I've been telling her that Danny Gokey won. [That's the dude whom my wife referred to, mnemonically, as *wife killer*....when in fact the poor guy lost his wife to cancer!]

Since, on her timeline, he just got voted out of the top three, the wife is now on to my shenanigans. Sometime later this week she'll find out if the ambigendrous Adam Lambert could hold off the far less talented Kris Allen.

It's utterly amazing that she still doesn't know who won, right?

Well, the only information she gets is from yours truly - a responsibility that I'd never abuse! She works hard all week; comes home to tend to the kids for a couple hours; and goes to bed where for a few minutes each night I apprise her of what she needs to know. That's all she has time for - even on the train her head is contantly buried in a Blackberry or spreadsheet. Occasionally she sees a news blurb in her work elevator but that's the extent of my information competition.

3) a. A style in art and literature characterized by deliberate vagueness or obliqueness. b. An example or instance of this style.

That's according to dictionary.com. Though I like the definition I memorized way back:

Obscurantism - A bigoted opposition to enlightenment.

And if you want a more scholarly example than the one I provided above - think of the Catholic Church and its former insistence on Latin-based bibles and services. Cynics allege that this was an *obscurantist* scheme to keep the masses dependent on the clergy; lest they interpret Scripture for themselves....
Posted by CaptiousNut at 3:31 PM

1. Catholicism was founded in Rome, by Latin speaking persons.

2. The Maximum Leader resides in a special city, carved out of Rome.

3. Latin is used for all kinds of mystical bullshit, dictum meum pactum.

4. Look at the back of your crucifix: it says "Made in Italy." You can't control a global fascist outfit if everybody is localizing the language of the canon.

5. Scripture is so preposterous that there is no worry a layman might "interpret" it.