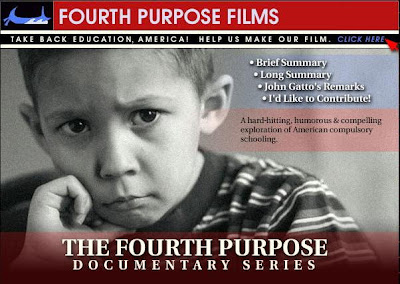 I’m here to ask you to support the film, The Fourth Purpose, with money, ideas, work, and prayers, but without the money first, the rest of this airplane won’t fly. What we are after in this film is the destruction of the pernicious school myth, which has paralyzed social justice in the United States for a century. Schooling as we know it, is a powerful expression of the sickness of this society, not a cure for that sickness. While the myth lives, we will never revive the libertarian America most of us prefer in place of the present empire.

Click the link above and read the whole thing - particularly the part on 'social efficiency'. I just can't get enough of this guy!

Here is my master link to Gatto-referenced posts.
Posted by CaptiousNut at 8:59 PM