Wall Street - It Really Is All Brawn, No Brains 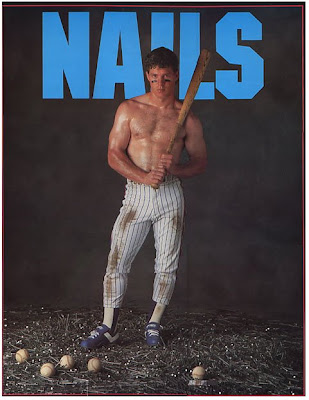 Being a Masshole myself, and a little bit young, I don't remember Lenny Dykstra as a Met. But I witnessed him firsthand in Philly where he often put the entire team on his back in carrying them to the 1993 World Series. He was one baaaad dude; and did everything with a real *flair*:

The 46-year-old has no more than $50,000 of assets and between $10 million and $50 million of liabilities, according to a petition filed Tuesday with the U.S. Bankruptcy Court in the Central District of California.

Dykstra's filing comes in the wake of more than 20 lawsuits he faces tied to his activities as a financial entrepreneur, including The Players Club, a glossy magazine for athletes he had helped launch in 2008.

According to an April article on ESPN.com, Dykstra put his net worth at $60 million, and also owned a black Rolls Royce Phantom and Gulfstream II jet.

Walter Hackett, a lawyer for Dykstra, said the event triggering the bankruptcy filing was a planned foreclosure sale of a southern California residence that Dykstra bought from hockey legend Wayne Gretzky for $17.5 million in 2007.

According to the bankruptcy petition, Dykstra's largest unsecured creditors include units of JPMorgan Chase & Co., owed $12.9 million, and Bank of America Corp, owed a combined $4.2 million.

Hackett said Washington Mutual, now part of JPMorgan, was the main lender on the 2007 home purchase, and that the bank misled Dykstra about his ability to afford the property. The lawyer said the bank deserves nothing on its claim.

Hah! JP Morgan and Bank of America getting stiffed to the tune of millions at a clip?

Who'd a thunk it?

One just has to love the lawyer's defense - that *the bank misled Dykstra about his ability to afford the property*!!!

Now I had no idea that Lenny had re-fashioned himself into a *financial guru* and that Jim Cramer had gone long Dykstra. Pay attention to the funniest part - between the 13 and 30 second marks:

You thought you were watching a CollegeHumor or SNL parody there, right?

Now there are probably only four or five people in the world who if they sent me an email...told me to own(?) a stock....I would actually take them seriously....He's one of them.

What else is there to say?

Just keep shorting Cramer, Cramer pumps, and banks that lend to them!

[Looks like Forbes was onto this story last year.]

Last year, in Empiricism - The Only Science I discussed the fabulous book Moneyball which touched upon Lenny Dykstra. In that book Billy Beane admiringly contrasts himself - a can't-miss talent who flopped - with Lenny Dykstra who was an unorthodox, cocksure killer. If memory serves me, Beane was astounded learning one day that Lenny didn't even have a clue who the imposing (HOF-bound?) pitcher was for their upcoming game. Lenny was simply guts personified and a complete neanderthal. 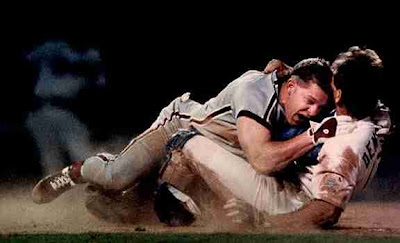 Looks like a spot-on diagnosis for today as well - not that he's any different than the rest of the meatheads on Wall Street.

Lenny played for the Jackson Mets with Strawberry before he got called up. And he has a tendency to kinda gamble a bunch. I even think that Billy Beane was playing here then, too.

That's a lot of scratch for back then.

Yeah, but that was only one weekend for him, too.

Last time I saw him was in the Jackson Airport about three years after he got called up. He was wearing floral jams and cowboy boots. He told the local media that he was making a fashion statement! I told him that his fashion statement was screeching that he was a moron. Then he ducked out on me, AGAIN.