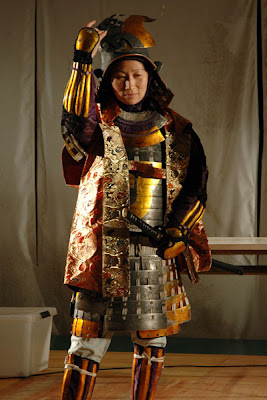 I'm not the most Captious person on Earth for nothing...

After reading anyone a bit, I can spot their weakness fairly easily.

Since John Stossel went live and I've been following him closely, I'm pretty sure I've discovered one particular area where I disagree with him.

Look at these charts he posted last week on his blog and on his "Everything is Getting Better" show: 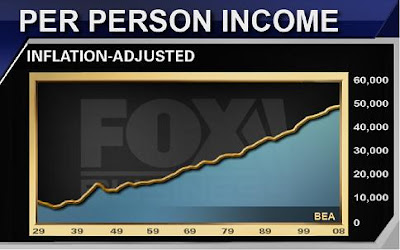 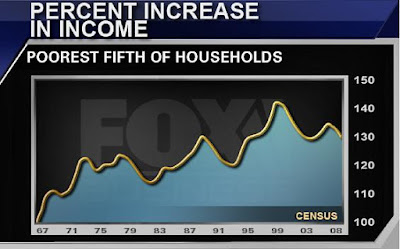 The first chart uses the ridiculously low measure propagated by Big Government currency debasers. In other words, the chart would be much flatter if deflated by an accurately priced basket of goods and services.

And the second one doesn't even account for said inflation! So what if your income is up a few percent when food, energy, housing, taxes, education, and medical costs are exploding, no? BTW, inflation of those sorts really only affects the *poorest*.

He also, in that show, put forth arguments that our *culture* is not worsening mostly with short-term charts on teen pregnancy, teen violence, and the like.

Now I fully understand that *adults* in the 1960s, 1970s, and 1980s most certainly also decried what they perceived as a *cultural descent*, but that doesn't mean it hasn't been a straight roll downhill. Yeah, girls are getting pregnant a bit less, but that doesn't mean they aren't dressing more like tramps, *servicing* guys in the 7th grade now, brawling more than ever, etc. (Men have always been dogs!)

It just looked like a pretty flimsy argument Stossel put forth.

Stossel also suggested that we, as a nation, were getting *healthier* just because life expectancy was rising. But, if I can ask the obvious question, what about *quality of life*? I don't know that artificially sustaining 'old coots', for an extra decade, by modern drugs, in an asylum ought to be counted positively in this regard.

Then he did a follow-up blog post which he titled - Everything Getting Better...Except Gov't Spending

In that he linked to a WSJ piece and highlighted this unsurprising chart:

Here's the problem with this line of reasoning:

Stossel just put up a bunch of upward sloping charts, and upward sloping arguments that *proved* our nation was getting safer, healthier, cleaner, more moral, and wealthier.

Except that a statist can turn around and say that the last chart he touted, the one highlighting steady growth in national debt and Washington, proves that the benefits of Big Government!!!

And that's precisely the type of slapping retort he'd deserve for wielding such weak arguments of his own.

Putting this one show aside, I'm loving his weekly program.

The Exiled John Stossel
Posted by CaptiousNut at 8:25 PM