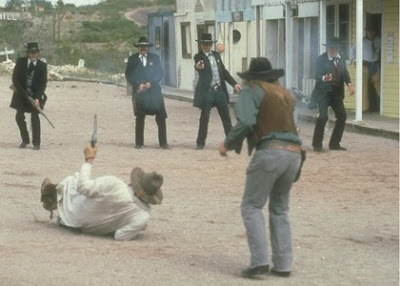 Okay, I deliberately and thoughtfully have not said a word to my landlord since the fireworks started on January 1st, when I first withheld rent. I knew, I just KNEW the silence was going to drive him crazy. He had no idea what I was thinking or planning to do. He responded by filing for an eviction - and got a court date much, much earlier than I would have expected.

I broke my silence late Tuesday night, with this email to him directly (no CC'd lawyers):

First off, we are happy to have received the interest legally due to us. thank you.

we were willing to pay february rent to you, but your lawyer sent me a note saying that *anything received would not be deemed rent, but damages*. I can't give you a check if it's not going to be considered rent. instead, i escrowed the money in a new account at rockland trust today.

also, i'm not sure if your lawyer has told you this, but by law you have to return our security deposit to us. by law you were supposed to escrow it immediately way back in 2007. the failure to do so is highly penalized. the law is quite clear. you can't do it now, after the fact. you had to do it within 30 days of receiving it and notify us of the account number; and you were supposed to pay us the interest every 12 months.

so by law you have to return it to us.

if you don't, the penalty is:

"...you are entitled to the immediate return of your security deposit AND triple damages, plus court costs, and reasonable attorney's fees. You also are entitled to triple damages, court costs, and reasonable attorney's fees if the landlord fails to pay interest on the last month's rent within 30 days after termination of tenancy."

My lawyer, of course, wants me to go down this route. he said we'll get the money from you eventually plus more penalties.

I'm sure your lawyer wants you to go to court too, so he can pad his bills.

I'm not too excited about dragging my kids into quincy court next week. but if you make me go, i will be forced to respond in kind with the TRIPLE DAMAGES suit noted above. and i will present the judge with a very, very long list of grievances that won't even include the security deposit. Again, i don't want to have to go down this route but your legal action is about to force my hand.

your other alternative is to withdraw the case ASAP. send me a note accepting January as a *return of security deposit*. and if I'm notified that the case has been withdrawn, you can collect the february rent which has been set aside. at that point, we can move forward towards terminating our relationship according to the lease, and amicably.

by the way, there is something wrong with the septic tank. our toilets are backing up a lot and occasionally smelling bad, they are burping water and stuff, plus the blower hasn't been working.

Now mind you, I waited until late Tuesday night to send him that. I'm sure the Moron's head was spinning for the past 36 hours trying to figure it out.

It's was probably the first time he learned of the possible consequences for not escrowing our security deposit. And I bet the $10,000 suit liability scared him somewhat.

Since I hadn't received a response I called his lawyer this morning just to make sure idiot had gotten my email. The hack attorney confirmed receipt. At that I asked if he, himself had seen what I wrote....he said he did, but had gotten a *bad copy*. Say what? My Moronic landlord doesn't know how to forward an email? Anyway, I had to run and that was all I wanted to discuss. The lawyer said I should get a response today. Fine.

I had to go as I was trying to pack lunch and get my kids out the door. But ten minutes later, the lawyer called me back with a proposition:

C'mon, idiot. I always hate negotiating with used car salesmen and their mind-peers. I laughed at him. DROP THE SUIT or there's no check.

Three hours later my landlord sent what amounts to a surrender flag. The details aren't ironed out yet, but should or could be by tonight.

He wants, er needs, my rent badly and seems to be willing to capitulate - though the proposed letter he sent me to sign had some BS line in it about how either party has the option to *re-file* with the court within 7 days. Say what?

I'm going to pay him rent and then he'll just re-file? Was I born yesterday or something?

So I'll probably be handing the clown a check for $2,500 soon. Mind you, I did pay the $867.44 water bill this week - that I haven't told him yet; I was saving that revelation for the judge. Plus I didn't want him to do something like make a mere $200 payment to delay shutoff - that wouldn't be fair to everyone else who pays their water bill!

Instead, that deduction is coming out of March rent - and will probably really, really piss him off, again.

Assuming the suit is dropped, our lease states that he has to give us 60 days notice for termination - AND it has to come on the first of the month. So he can't give notice until March 1 at this point (I think); therefore we'll be legal residents here until the end of April, almost 3 more full months.

(I promise I'll clean up this post later on tonight).
Posted by CaptiousNut at 1:40 PM

As an aside, my experience with Landlord/Tenant court was that Childen were absolutely forbidden from the court room.
The tenant's not-to-thinly disguised pitch for sympathy (presence of little kids) was greeted with hostility by the Judges , even though they were generally biased toward tenants.

But I was going to have both my 5 year old and my 3.5 year old testify!

The more you string it out, the more Melonhead is paying Mr.Lawyer.

Well, at least the more Mr. Lawyer is going to try to *charge* Melonhead.

Unless he got paid upfront, I'll bet he gets stiffed like the parade of architects, contractors, other lawyers, accountants, and other creditors of Melonhead.

As of this morning, still nothing is resolved and my court date is still scheduled for the 11th. Though I expect something to be done today.

Going forward, I am going to privately bash the lawyer to the clown. "He gave you bad advice. He should have told you about the escrow law. He steered you into unnecessay litigiousness that would get him paid. Etc."

And I'm going to privately bash the clown to the lawyer. "He won't pay you. He's stiffed dozens of people already. He's complaining about the job you did!"

(I'll bet FCB has never used that verb before!)

Hahaha no I never have because I have no time for that nonsense - but I do appreciate your situation and enjoy watching!