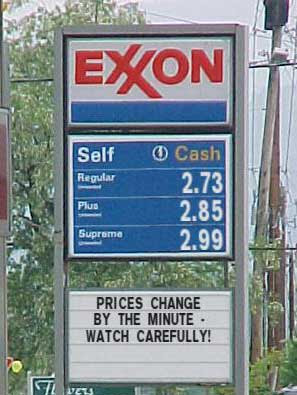 So I paid $2.70 a gallon for gas the other day. Whatever, right? Nobody cares about the price of gas these days at that level anyway.

But that wasn't the case for $2.70 gasoline 4.5 years ago when it first hit that threshold.

No, in the summer of 2005 people were going ape$hit over such an exorbitant price. One couldn't go anywhere, read any *news* paper, or watch the local news on color television without hearing the deafening outcry.

Why's that? Well, because gas had just shot up a whole dollar per gallon from 2004.

As you can see from the chart, gas was roughly only $1.61 a gallon six years ago. So even though we've seen $4.00 costs briefly, and even though the complaining has simmered down, the jump to $2.70 today still represents an hefty inflation of 67%.

But there is somewhat of a moralizing economic lesson in this.

Financial pain heals quickly. Those same people who thought the world was going to end with $2.70 gasoline are all of a sudden resigned to the new reality. They've adapted, perhaps changed driving habits or cars, and moved on.

This is precisely my counterargument against those, particularly politicians but also against the plutogogues like Steve Forbes and Goldman Sachs, who think that if housing prices (or Treasury prices) fall significantly, that the world as we know it will come to an end.

They need to just rip the band-aid off and quit their blubbering!

Alright, here's a nice little blast from my Marginalizing past...

There is no U.S.-wide housing bubble like the bubble that occurred in high tech in the late 1990s.

But he also delivered this ridiculous assertion:

The real bubble is one that has, so far, gone unexamined: the price of oil. There is absolutely no fundamental reason for petroleum to be hovering around $70 a barrel.

For that one, see - What Real Estate Bubble?.
Posted by CaptiousNut at 11:44 AM