Today was February expiration - and it was a roller coaster! 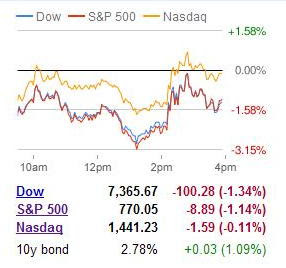 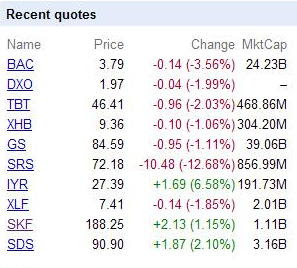 I was smelling a bounce today. After I bought those SKF puts, I decided to cover my Goldman Sachs short. I bought it back at 80.41. An hour later, around 2:50pm that thing had bounced above 87.00! Lucky or good?

Well I was neither on the entry point. My cost basis was around 72.00 plus the bit of ca$h I made flipping some options last week.

So I stepped out for a minute and came back to see the bounce I had presciently sniffed. The SKF had dumped from a high of 213.09 all the way down to an intraday low of 180.83. I didn't even witness that as I was out slow-driving my daughter to dreamworld. I was cursing when I got back because the SKF was creeping up to 194.00 again. I covered my puts at 192.14. The fact is, if I had been at my desk I very well may have started buying at 200.00. After 13 years of trading, I believe I've made a whole lot more money by *not watching* than by gluing myself to the monitor.

I also dumped that *dumb* purchase of Bank of America. I bought this AM at 3.33 and watched it crater to as low as 2.53 before it bounced. I was lucky to get out at 3.53. Yeah, it touched 4.09 before closing at 3.79. BAC was weak today ostensibly because Ken Lewis was subpoenaed by Andrew Cuomo - in fact I think its opening was delayed. The market is full of Morons. If Ken leaves, that's BULLISH! (Insofar as a company $1 trillion in the hole could ever recover.) 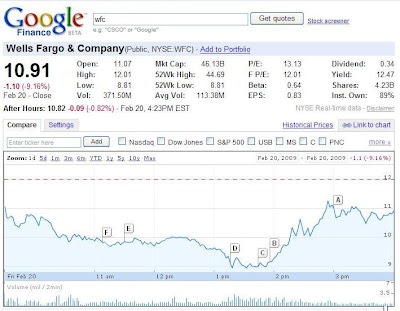 My old friend Wells Fargo was really in the pooper today. It was down below $9 a share and I was staring at the Feb 10 calls. They were offered at a measly 10 cents and I started drooling. Of course I bought none and the POS rallied to 11.39! I had a great day trading but that one would have been sweet.

Now that I am out of SDS (see intraday link) and GS, my shorts are really dwindling.

All that I have left on the bear side is: SRS, EEV, short QQQQ.

That means a crash is imminent - though not until I go net long.

And now it's time for swim lessons.
Posted by CaptiousNut at 4:49 PM