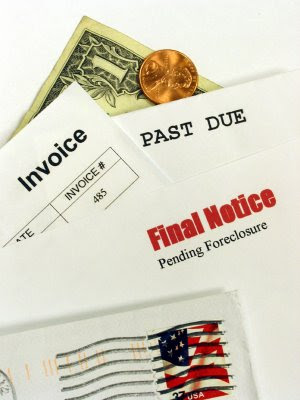 My landlord is descending upon *the end*. The reality of his four underwater properties and now revenue-less subprime business can no longer be ignored.

As I mentioned previously, we had a spat five months ago and I stared his broke-ass down. So I haven't seen or heard much of him.

But when I was in Florida Mrs. C-Nut had to deal with the clown over some heat/plumbing issues. To her he confessed that he was tired, that he felt like all he was doing now was *managing the banks' properties*.

But that's all the Moron was ever doing!

And that's what most people, most so-called *homeowners* are doing when they put next to nothing down and take out a 30 YEAR MORTGAGE.

Actually, I want to modify that last statement. If they live in the mortgaged house, they are more like *renters* because they are renting money.

Now I swear, since our mailman comes like clockwork at 4pm daily, that my landlord has been swinging by to intercept his mail so I wouldn't see *foreclosure notices* and whatnot. (We share a mailbox.) For a Moron who's otherwise all over the place, he sure has promptly been there to retrieve his mail.

But today, he wasn't - as the mail came early. Sure enough there was a *first notice* from Greenpoint Mortgage in the box this afternoon.

That particular default could be on my house or any of the others. He's probably got at least two different liens on each property. It's surely going to be an interesting next few months here with my living situation. I'll keep y'all informed - because more than a few of you need vicarious excitment.
Posted by CaptiousNut at 9:39 PM

Aw, it is just isn't going to get that bad for him. I'm been reading the Stim Bill and it looks pretty good for me.

I have NOTHING TO WORRY ABOUT.