Balls Were Made To Be Broken 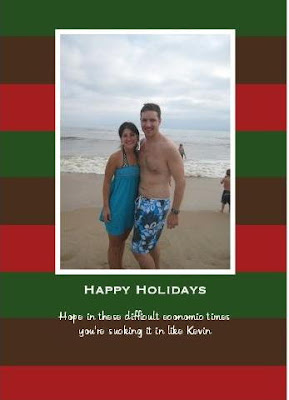 Then he well deserves to get PWNED. His brother constructed the above as his *Christmas card* on one of those photo websites and mailed it out to the entire extended family.

Hope in these difficult economic times you're sucking it in like Kevin.

I found it pretty darn funny.

This comic relative of mine takes this tack every year. Once he even tried to victimize moi on his pagan holiday card.

It's money well spent and a whole lot better than sending everyone a pic of you and your dog!
Posted by CaptiousNut at 1:46 PM

Why is DXO down 6% while oil is up today? Is it expiring contracts? Trying to understand the rationale but have taken it as a good opportunity to dollar cost down. Any input?
Kfell

I admit I haven't read the prospectus and don't know whether DXO is near month, middle month, out-month, or some combination thereof of oil futures.

Make sure you read this. I know I promised to do a post on the subject and apologize for not doing so.

These ETFs decay like options over time. That means they are flawed proxies that must be averaged into. In other words, never buy a position so big that you can't add, re-add to, and re-add to. I really should have mentioned this as I have been posting a lot on my ETF trades. It seems that a lot of my readers piggybacked on this poopy trade of mine.

I severely underestimated the demand drop-off in oil, obviously.

Oil bulls need a dip in the dollar, badly. That is hard to envision right now with foreign markets and their currencies foundering. The fiats are in a race to the bottom.

One thing I didn't realize was that all inverse ETFs, including 1X inverse ETFs , are subject to slippage.