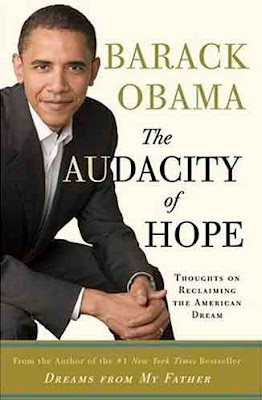 So yesterday I'm on the phone with a friend, she's optimistic from watching the news that she's going to get help on her mortgages - that she'll potentially get the principal(s) reduced.

So, she's waiting, delaying personal *de-leveraging* on the promise of Obamian rhetoric. 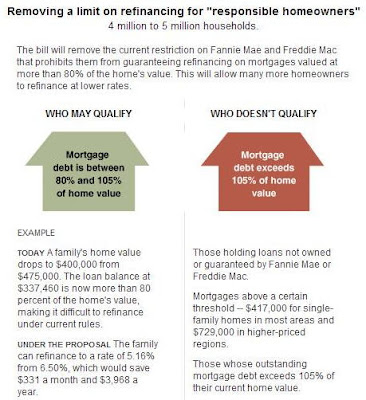 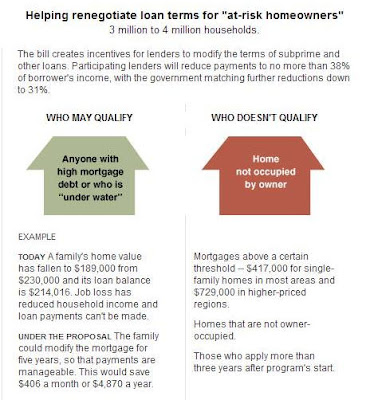 Now before I even read the details I informed my friend that she wouldn't get any help whatsoever from these marketed bailouts. Heck, pandering politicians have been touting *help* and *assistance* for 1.5 years now and to what avail? Do y'all know anyone who's been saved?

You see, they craft these *modifications* in a way that makes them toothless. In order to get one, you have to demonstrate income and credit, usually - and you have to live in the home, eliminating speculators. That must preclude, right off the bat, about 95% of distressed so-called *homeowners*.

The first graphic above specifies that the distressed homeowner must have *20% equity* to qualify for a government sponsored re-financing - AND that the loan must be conforming. But I'll bet most of these people already have refinanced to low rates. AND, most of these people are not in trouble. Just about everyone that had equity, and fell into financial trouble, they quickly extracted that equity through a HELOC. So, in summary, the people in this category

1) Don't need the money.
2) Already are paying pretty darn low rates.
3) Aren't a large enough population to matter for either the housing market or the banks.

That's right. Remember these bailouts are actually for the banks; the rhetoric is for Main Street. The hope is for people like my friend who are clinging to unsustainable lifestyles.

After an 18% drop in their home value, they're now underwater in that loan: The family has $214,016 remaining on their mortgage, but the home value has fallen to $189,000. In addition, perhaps the family is dealing with a reduction in income when a parent was moved from full-time to part-time work.

By reducing that family's rate to a government-sponsored 4.42% for five years, they'd save $406 a month, according to White House figures.

"That money becomes available for consumption or savings and both are good," said Mark Goldman, a lecturer of real estate at San Diego State University and a mortgage broker. "The more money people have available to save or spend helps the overall economy."

Of course this clown, this *lecturer* Mark Goldman, thinks the money will just be created out of thin air. Nooooo, there can't be any ramifications for our already bankrupt government throwing MORE DEBT onto its books.

But look at Obama's ludicrous example. A subprime house that sold for 230k at the peak is only down to 189k?

If that was an accurate, representative decline for a subprime house then there'd be absolutely no housing market issues, no Wall Street banks imploding, etc.

So, despite loud pronouncements to the contrary, Big Government isn't really giving away money, it's not really modifying loans, and it's not really forgiving debt. Not yet anyway.

When it does, that'll be the death knell for housing as mortgage rates, free market ones anyway, will skyrocket to 10%.

As stupid as these pols are, they kinda know this. At this time, rhetoric is merely that - though it does have the negative externality of false hope.

This elaborate scheme to inflate the economy for as long as absolutely possible is outright torture. Amputation would be so much better.

Instead of having our right arm chopped off in one fell swoop - we are first having our fingernails plucked out; then they are melting our hand off with acid; slowly peeling the skin off;....; all the the while promising the pain will stop any minute now if only we do X,Y, and Z.

See also - The Assault On Free Markets And Private Contracts.
Posted by CaptiousNut at 10:47 AM

Where are my stock trading tips?

I like you too much to do that to you.

I cannot stand the idea of reducing the principal. Talk about punishing those who lived within their means? WTF? What does that do to all the other people in the neighborhood who actually have equity and can afford their houses. They immediately lose their equity to keep some low life in their house they shouldn't have bought. That prick can sell their house for less than me and still make money-never mind the portion of my tax $ that went to lower the principal. Ridiculous. I don't want the market to fall, I have a vested interest in it not falling, and this will in the longer term cause it to fall more. Whether things will stay the same here in central CT I don't know. But my area has seen a minimal decline in prices so far.

One thing to keep in mind, with regard to *ocean-front* properties in CA, is that there are virtually *NO* sales per quarter (I think the LA Times reported 5 for Santa Monica and 7 for Pacific Palisades, less for Venice and virtually none in my area, Marina del Rey) so I think this makes price discovery a little difficult and ultimately skewed. It is coming though, believe me. Oh, Manhattan Beach is beginning to crack as well.

C - I think there are additional restrictions on modifications including date of purchase. Finally, in CA and at a certain bank, they will modify what is known as *super-conforming* which is 629k and below.