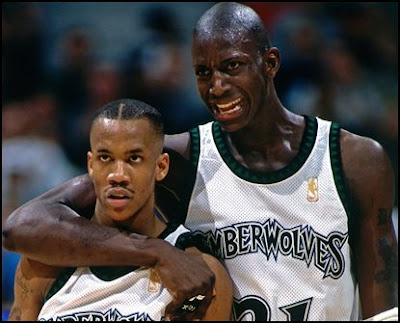 Now I've elevated Danny Ainge before, but the Boston Celtics GM was begging to be Marginalized this week with his signing of Stephon Marbury.

I thought about it, was about to write the post today,....but chose to refrain. Marbury is a no-risk flyer; he can be cut at any time should he wax malcontent or should a better play hit the waiver wire.

PLUS, I decided to refrain from busting on Ainge because West Coast Tom sent me a note with that very suggestion. So Tom read my mind and in doing so convinced me to change it!

I remember years ago, in Philly, how pissed Allen Iverson got at his agent David Falk. Apparently Falk showed his other client, Stephon Marbury more *love*. I think Falk hadn't even bothered to attend a Sixer game until Marbury was in town.

Iverson always had that huge chip on his shoulder; and went on to prove Falk wrong by reaching the Finals, winning an MVP, and becoming a much better player than *Starbury*.

But over time, both knuckleheads have proven that shoot-first point guards are anathema to winning basketball games.

Note the Detroit Pistons are 24-28 since trading for Iverson this season. After his one good year in Philly, AI hasn't done squat. And Marbury's done even less!

The talking heads seem to all agree now, much later, that Billups was traded for AI to dump salary. It would seem Dumars was ahead of the curve reacting to a reduced cap for the next season. It had nothing to do with winning games.

Starbury-I agree with you. This was a good move for Ainge. He has nothing to lose here. Marbury acts like a jerk, they cut him. Plus Marbury has everything to gain by being a good citizen. I wonder if Marbury regrets getting out of Minnesota all those years ago. Him and KG in their prime may very well have won a title together. Back then they were the epitomy of new school basketball-though now KG is the second coming of Bill Russell-somewhat accurately too.

Marbury was smiling and giggling when he entered his first Celtics game.

Your Knicks have stunk for years so now you follow my Celtics?

Central Connecticut is *outside the grip*.