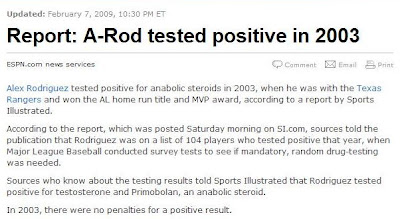 So A-Rod was juicing....who's really surprised?

Not me. One of my good buddies from college was a childhood friend of A-Rod. He's known him since they were 5. He told me that A-Rod was so tiny, such a wuss, that the whole gang of kids used A-Rod to practice *wrestling moves*. They used to body slam him, put him in the figure-four, and, most memorably for my college buddy, they use to suplex A-Rod all the time.

The gang - a bunch of mostly pale-skinned Cubans - also nicknamed A-Rod an *epithetical diminutive* that I won't write on my blog. So guess away!
Posted by CaptiousNut at 7:13 PM