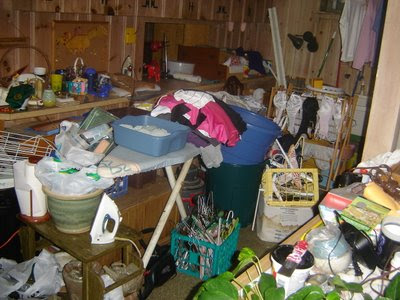 "Until the end of August, before the economic storm arrived, Fidelity’s results were on schedule," Chairman Edward C. "Ned" Johnson III, wrote in a letter to shareholders accompanying the report. Then in September, "we entered a downdraft in stock prices which hasn’t been seen since the ‘30s," Johnson wrote.

So it's all the market's fault?

And here's his zinger that got him atop DrudgeReport.com yesterday:

"We can only hope that the government’s cure doesn’t further sicken the patient," Johnson wrote. "During the ‘30s, Congress -- with guidance from the president and the same kind of good intentions -- shifted the country’s cash flow away from productive business to government make-work projects, which most likely prolonged the Great Depression."


Okay. Now, usually I'm all for a good little swipe at *Big Government* but this statement, from this man, is a screaming deflection.

The fact is, Fidelity is a disastrous operation. It's bloated, jurassic, and severely underperforming.

Here on the South Shore of Boston, seemingly everyone I meet works for Fidelity. This local sub-population, they are by no means Morons, but let me just tell you, they make gobs of money.

You know how it is - in good times, quacks and hucksters skate by, but when the going gets tough....they get exposed big time.

That's the story of Fidelity right now. A turbulent market has exposed their well-concealed incompetence. Fidelity has proven to be nothing more than a giant bull market skimming operation. Look at their latest sophistical propaganda that tries to persuade its ravaged clients (and new suckers) to *keep buying*. Heck, the numbers it uses are hardly compelling:

Fidelity nicknamed one of the market timers the "bear-market dodger." After the start of the downturn in March 2000, for instance, he shifted new contributions to cash, beginning in April 2000.

A second market timer, the "bear-market refugee," shifted new contributions once the bear market was official — hit the 20% down threshold — to cash starting in March 2001.

The third timer was dubbed the "doomsday capitulator." He shifted new money to cash at the market's low point in October 2002.

The three timers resumed investing in stocks as of January 2004. In the real market, that was when investors' cash weightings fell back to their long-term averages as investors returned to stocks, Fidelity says. Going forward, each portfolio got the bogey's 10.2% average yearly gains from 1927 to August 2008.

January 2004 was also the point in time when Fidelity measured how each strategy had fared.

A difference of 30k, over 30 years? That's supposed to be significant?

Note the so-called dodgers got to sleep at night - a point totally unquantified, totally unaddressed by the buy-buy-buy propaganda. 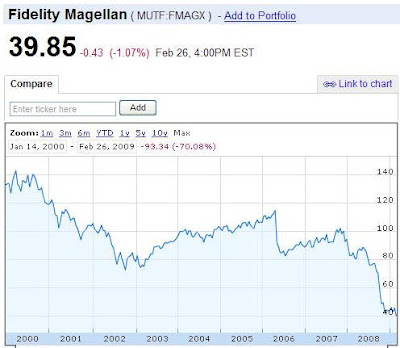 Yeah I don't think those particular dollar-cost averages would behoove the ridiculous propaganda....we'll just leave them out and keep it quiet.

Everything I hear, read, or witness about Fidelity these days just screams incompetence, AND stupidity.

Fidelity Investments, the world’s largest mutual-fund company, more than doubled its stake in Citigroup Inc. in the fourth quarter, ahead of a 63 percent slide in the stock this year.


One local Fidelity guy, an analyst or something, told me back in September to load up on the *best* stock on Wall Street. He said to buy Starwood Hotels. Since his recommendation in September, the stock has fallen 69%, from 37.00 to 11.42 today!

Why exactly is he making 600k (or more!) per year and I am sitting at home flipping odd lots?

Well probably because the PMs, the portfolio managers, at Fidelity fancy his useless research, or his personality.

Out of the dozen or so Fidelity employees I've met since I moved to this region, I've yet to hear of one of them getting laid off. I'm telling you, they make GOBS of money.

That company is in deep denial and won't bite the bullet until after another nasty *down year* for the markets.

Firing all their analysts and all their *mouthpieces* - as they should do - would be to admit that the entire company is, and has been, a fraud.

Though, in Ned Johnson's defense, this fraud was fueled by the laziness and stupidity of passive investors.

Mrs. C-Nut hates it when I bash asset managers. She sees nothing philosophically wrong with an industry that skims money from unsuspecting, deserving Morons.

I look at it egotistically. There's no way I could spend my time and energy fine-tuning investment strategies and marketing schemes that demand *victims* - just so I could live in big house, in a desirable neighborhood, and drive a nice car (to the train station!).

To be fair, fido's fixed income offerings are not bad. Its just their equities division is a complete disaster. If you asked all of their employees, a good percentage would love to have a chance to manage their 401ks outside the company's 401k and many would chose index funds or etfs to allocate their dollars. But the company culture instilled on its workers drives many of the worker bees to neglect their families and dedicate huge amounts of their time hitting their numbers and phone metrics. Its quite sad and I get many frowns and disappointed looks when I get outspoken about the slave driver mentality and lack of accountability from the money management division. I guess that's what happens when you are not educated in the public school system.

This is great propoganda. Everyone's eqity offerings are a disaster right now. Nice pic thou - is that your torso?

That is not my torso...it's my hiney!

I met a Fidelity *broker* right before Christmas. Kid seemed young though he had been working there for 6 years.

Told me to buy the triple long Dow ETF because of Obama's stimulus package. I didn't even know there was such a ticker.

I'm not kidding when I say that everything I hear, read, or experience about Fidelity bespeaks a culture of incompetence.

I have a Fido brokerage, and I don't like it that Fido's Money Market funds yield less than Vanguard Money Market funds. For example, the Vanguard Muni MM fund for the state I live in currently pays like 0.78% tax free which is very low (thanks to the Fed's ZIRP), but Fido's version of the same type of MM fund pays like 0.21%, which riduculously low yield! Clearly Fido is skimming too much.