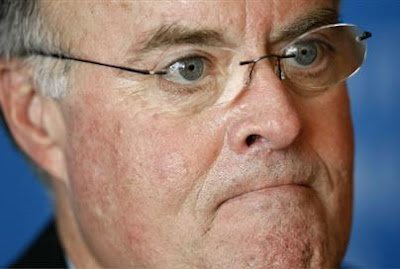 Though I did tape the buffoon's CNBC interview yesterday I have to admit that I have no desire to watch it. The scapegoating and predictable, clichéd optimism I find too boring to bear. And I did hear right, Bank of America's Ken Lewis did invoke *patriotism* as a factor in him bending over for Merrill Lynch's John Thain:

He said that he and his executives eventually came to agree with the government's position: "They said, 'We strongly advise you that it is not in your best interest or the country's best interest to walk away from this.'"

"We're going to get on with doing business," he said. "And frankly, we had a pretty good January."

How much do you wanna bet that on the next disastrous *earnings* report, he blames a *pretty bad* February or March?

In the memo, Lewis called the company's performance in January "encouraging." The "extreme dislocations in the capital markets we suffered last quarter seem to have moderated" but "credit costs continue to be a big issue."


Oh,....but if not for those nettlesome *credit costs*!

That'd be like a football coach saying his team practices well, works hard on defense, plays together, knows the plays,.....just has a minor issue *outscoring their opponents*!!!

With much of Merrill's senior leadership departed, Mr. Lewis said it's better for officials of acquired companies to leave sooner rather than later. ""Nobody executes better than we do. This plays to our strength," he said.

Nobody *executes* better than Ken Lewis?

How about nobody *commits suicide* better???

[I pulled those quotes from a variety of sources. The full transcript is here - and it's an annoying PDF.]

Here's a more accurate picture of Bank of America: 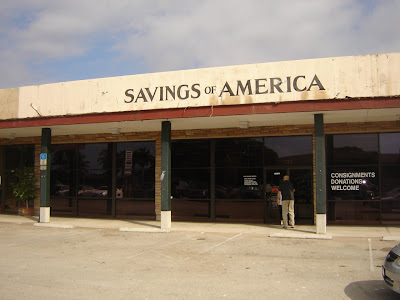 [The disrepair is more apparent if you click on the image. This building is on route-41 in Naples.]
Posted by CaptiousNut at 1:41 PM

You should check this guy's blog out. He's been very vocal about all the shenanigans going on with the financial system: