Trading From The Mall 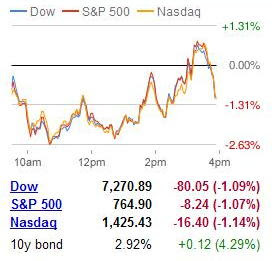 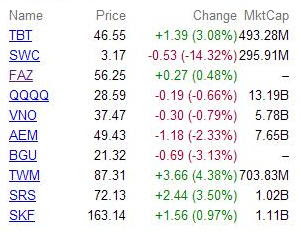 First visit - Intraday Trades - Feb 24th, 2009. I have additional commentary....in the comments of that post.

Today was a good trading day, theoretically anyway. I knew it was going to be a *mover* but had mentally committed to being away from my desk. I went to get Ashes; tried to go swimming at the Y (was too crowded on Ash Wednesday!); and ended up hitting the mall and Barnes & Noble with my kiddies. With all that planned, I wasn't going to be able to *professionally* monitor my positions and take advantage of the predictable volatility.

I had forgotten that I left a 50.00 bid out there from early this morning - until Kfell mentioned that he bought some stock there. Good for him! And good for me! 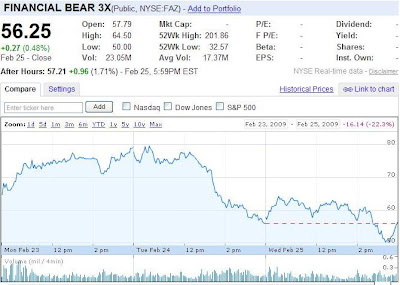 Though I'm sure it technically traded below 50 on an ECN somewhere....officially we bought the low of the day!

Other than FAZ, I did re-initiate a small position in Stillwater Mining - SWC. I got long at 3.31.

And I also dumped the additional SRS that I bought yesterday. I got in at 69.45 and out early this morning at 74.00.
Posted by CaptiousNut at 6:18 PM

I got kicked out of my SWC twice, Monday and then today, with my 5% stop-losses. I bought when it was down around 10% from open today and was amazed that closed down another 4.53% or something and kicked me back out. URGH!

I've never had any success with stop-losses. I basically don't use them.

Plenty of traders do however. Big guys too.

I don't like this stock that much. I hope no one buys too much on my account. Put it this way, only .75% of my net worth is at risk here.