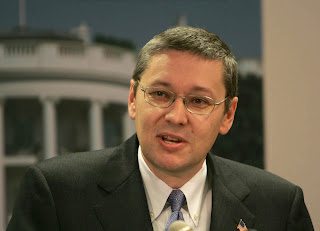 Greg Mankiw on our bankrupt banks and the specter of *nationalization*:

I don't pretend to be enough of an expert, or to be close enough to the facts, or to have a large enough staff, to know what should be done with the banking system, which is at the center of our current economic turmoil.

If the government is to intervene in a big way to fix the banking system, "nationalization" is the wrong word because it suggests the wrong endgame. If banks are as insolvent as some analysts claim, then the goal should be a massive reorganization of these financial institutions. Some might call it nationalization, but more accurately it would be a type of bankruptcy procedure.

Bankruptcy could become, in effect, a massive bank recapitalization. Essentially, the equity holders are told, "Go away, you have been zeroed out." The debt holders are told, "Congratulations, you are the new equity holders." Suddenly, these financial organizations have a lot more equity capital and not a shred of debt! And all done without a penny of taxpayer money!

Did you catch that?

According to this Harvard genius, this intellectual powerhouse, all it takes is a stroke of the pen, a canceling of equity to recapitalize the banks!

First of all, debt holders ALREADY own the banks. They have first crack at the assets in a liquidation - or at least precedence over stock holders.

Second of all, no debt holder WANTS to become a mere equity holder. They want their promised interest and an eventual return of their principal. Furthermore, you can't just wipe out the debt holders without serious negative wealth-effect ramifications; there'd be CDS (credit default swap) consequences to boot.

Thirdly, the idea that *debt* is what ails the banks is a ridiculous mis-diagnosis. Banks are ravaged by EXCESS LEVERAGE and POOPY COLLATERAL.

A *larger staff* would most certainly not mitigate the ignorance of this quack. He's incorrigible!

Note that it wasn't enough for Greg Mankiw to first attempt to regulate comments and shortly thereafter wipe his blog clean of all comments, all *negative feedback*. See Greg Mankiw - Total Loser.

It looks like he's now removed all *Links To This Post* from his blog. It's not just that he doesn't want Captious retorts alongside his tripe.

He's determined to insulate himself from all criticism. He's Marginalizing himself! 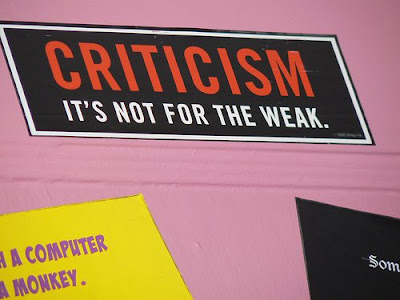 I once heard someone in my own family, who I once loved very much, say,"I don't take criticism well," as if it were a boast, and I knew at that instant there was no way at all for her to grow in mind or character with that self-destructive attitude.

That's from page 62 of his new book - Weapons Of Mass Instruction. Y'all can blame that book for my *light* posting this weekend.

Fear not, I should be done with the book very quickly. By the way, it's his best book yet, by far.
Posted by CaptiousNut at 3:43 PM

Just so you know, I checked my Economy for Dummies, and it actually has "POOPY COLLATERAL" defined as 'collateral that sticks to anything and everything.'

So, that is my new favorite term.

Read Gatto all weekend. I too will be done by the end of the week. Is there any home school model where the children are educated at their parents place of employment? Can't exactly quit the company I own, nor is my wife interested in quitting. It all comes down to me.

Dude, your office is the IDEAL place to homeschool.

The kids don't need as much hand-holding as you think. The idea is to teach them to teach themselves. I make my son read the directions on each page of his workbook and follow them on his own. He does this almost flawlessly - and he's only 4. As the kids get older they'll be doing mostly independent study. They need to be in an office or factory. They need to be learning that *real world* stuff from day one.

I don't know if you are reading "Weapons of Mass Instruction" - you should. It has tons of examples of kids working from very early ages: Edison, Franklin, Carnegie, Buffett, Dell, et al.

I'm going to be discussing homeschooling a ton more going forward. It may seem daunting, seem like a lot of work for a parent to take on the responsibility for teaching their kids everything from the alphabet to Greek to calculus but it's really not that hard.

Furthermore, every worthwile thing in life requires hard work - be it a good marriage, a low handicap, high morality, or professional success.

Truth be told, I want to sell and take the kids home. Alas I don't think I can sell for enough to do it. We'll see. And yes, I am reading "weapons of mass instruction" along with several other books that dovetail nicely. Two on making education an all the time activity-TY Amazon recommendations. and strangely enough, In Defense of Food, and Eaters Manifesto". If you read it you may find that it actually fits right into Gatto and Libertarian concept. The whole "nutritionism" concept that takes eating and food choices away from us and puts them in the hands of scientists and other elites who have a pretty lousy track record of good advice. I highly recommend it.