The SRS is the Ultrashort Real Estate ETF. It's currently my largest position on the equity side and although I'm underwater on it (started buying at $128 or so) I'm pretty comfortable holding, and perhaps adding to it.

The SRS provides a leveraged short of the Dow Jones Real Estate Index - a composite of 82 REITS. Here are its 20 largest components and their current percentage weighting:

Adding them up, in my head, they total 62.3% of the entire index value. Let's look at the biggies:

SPG is Simon Malls. I made $$$ shorting that turd in 2008 so many of you should remember that ticker. It stands at $38 a share today; can you believe it was $100 in September? They just decided to reduce their dividend. Technically, they decided to change a *cash* dividend to a mix of *90% stock* plus *10% cash*. This is highly dilutive and, worse, it might be suggesting that the company has decided to wipe out its equity holders, IMO. It seems Simon has chosen to hoard cash (like me!) and perhaps use it to buy bargains and whatnot. Bondholders are in good shape - AND may even be advising the company to reduce the dividend, conserve cash, and wipe out shareholders. I'll bet the big boys on Wall Street scooped up a ton of SPG debt, shorted the stock, and then started to exert pressure on Simon.

Then, after they fleece shareholders to enrich bondholders, expect another IPO a few years down the road!

Next up is NLY, Annaly Capital. I just spent a good hour reading up on the company via Yahoo's message board. Essentially, the company borrows short and lends long - BUT only on Agency debt. In other words, Annaly buys up Fannie and Freddie Mac mortgages with 1% or so short term loans that they have to keep rolling over. Everyone assumes that short term rates can't rise and that Big Government will never default on Agency debt. Ergo the stock is a dividend machine, yielding about $2 per share on a $15 number. That's a pretty nice 13.3% return - especially with the current 15% tax rate on dividends. NLY has negligible short interest which testifies to investor confidence. I believe they are levered something like 7-1. If the government ever said - as they most certainly should - *Fannie and Freddie bondholders need to take a 10% haircut*....this company would probably be wiped out.

This stock appears to be a problem for SRS holders, who should ideally sell put premium in NLY as a hedge.

Next up is PSA - Public Storage. They own self-storage facilities across the country. Depending on whom you ask, they are either in good shape or bad shape. Here's a primer on how they are supposedly doing now. They don't have near the debt load as Simon ($646 million vs. $18 billion) so it's more unlikely that their equity would be wiped out. 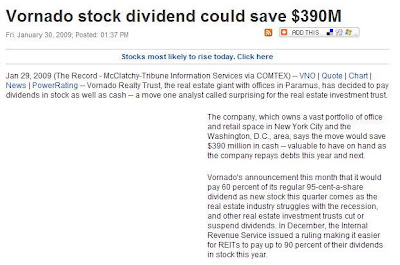 VNO - Vornado Realty is another interesting story. They own office and retail space in the big cities: Washington DC, New York City, Boston(?), and San Francisco. They also just decided to change its cash dividend to a mixture of cash and stock.- 60 percent is going to be stock now.

While Mrs. C-Nut and I were enjoying a drink at Tommy Bahamas in Naples last month, some jabroni leaned over us to pick up his take-out order. We got to talking and were informed that he worked for Vornado. Of course I picked his brain, and provoked him by telling him I was (at least by proxy) short his company. He laughed. And said they had *$3 billion in cash* and only made investments in the big cities....and that big cities, particularly DC, were immune to economic downdrafts because everyone worked for *expanding* government.

Do y'all know how many times in the past year I have heard someone tell me that the company they work for is in good shape....and I told them I was short their employer, explained why, and each time I was proven correct???

Without mentioning any specific tickers, there has to have been at least 5 different instances that I can think of off the top of my head.

If you work at a company, if your livelihood already depends on its health, a non-Moron really ought to lean skeptical of its finances, of its future.

Okay that's enough. Taylor is going to do the next 16 tickers for y'all.

The major story for REITs today is the slashing of dividends. In fact, in the last nine months, 41 REITS have cut and/or diluted payouts. Some are doing it because they need to, others because they want to protect against *debt rollovers*, and still others so they can perhaps go on a distressed acquisition spree.

Now it'd be bad enough if the REITs simply lowered payouts but what they've done, this Ponzi dilution with stock dividends, could spell disaster for shareholders.

Today, institutional bondholders are asserting control and reminding all investors the forgotten truth about the hierarchy of corporate ownership.

AND, they had help from their cronies in Big Government:

The IRS is helping commercial real estate owners out with a new rule that allows REITs [real estate investment trusts] to pay up to 90% of their dividends in stock. After what we assume was much lobbying, the IRS changed the rule to help REITs conserve cash in a liquidity constrained environment.

Why did they change the rule? Because Goldman Sachs, Bill Gross, and the other plutocrats own a whole lot of CRE debt.

Basically, the pols changed the law, and the big investors took money from the little ones, yet again. 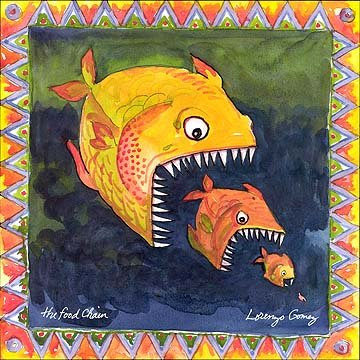 The SRS, like all levered etf's, is only useful for day trades.

I would refrain from accepting the blogger's conclusions without some deeper thought. (a) he gets the tax rate wrong. (b) he seems to think that it's ok to hold a leveraged ETF long-term. (c) if Annaly is leveraged 7-1, a 10% haircut would still not be enough to wipe them out (try 14%, numbnuts). (d) that's academic, anyway, since Annaly reduced their leverage this past quarter. (e) he only is counting the number of times that his predictions were right, but what we really care about is the *rate* at which his predictions were right -- 33% of the time, perhaps? (f) even if companies are paying out dividends as shares right now, shorting them will still cost you at ex div time, and those dividend payouts can really sting.


All that said, although I am skeptical that SRS is a really good play, I *do* think that the blogger is right to point out the weakness of REITs right now. The potential for dilution is a weakness, in particular. The correct response is to short particular companies (like Simon) rather than simply carpet-bomb the entire sector via SRS.

(c) Is wrong. The marking-to-market of extant investements would be a crushing blow.

(e) Every one of my trades from last year has been posted on this blog. Furthermore, a 33% batting average means nothing. It's the size of the winners versus the size of the losers. Where exactly is the link to Anonymous(e)'s trades?

(f) Stocks drop by the amount of the dividend when they go *ex*. With *stock dividends*, shorts get shorter, have LESS CASH to pay out, AND the stock dilutes.

You can trade these things on longer time horizons than a day.

Yeah, there's slippage. But just about everything one trades, outside of liquid futures, has slippage of one kind or another. Think of these ETFs as options that decay and have a sizeable a bid/ask spread.

The market is pretty volatile these days. With so much movement, there's quite a margin for error - so long as you don't get too big, or too unlucky.

Just look at the SRS alone: The corresponding long opposite of the SRS is ROUGHLY represented by the IYR, which is down 40% over the last year. That would make one think the SRS would be up ROUGHLY 80% (2x's short) over the same time period. In fact the SRS is DOWN about 40% - That's some slippage!

As I've long said, the leveraged ETF's are really only useful for day traders.

Not tonight though. I've been at my PC for 10 hours. Time to sign out.

...I don't quite understand this:

"I believe they are levered something like 7-1. If the government ever said - as they most certainly should - *Fannie and Freddie bondholders need to take a 10% haircut*....this company would probably be wiped out."

...NLY holds mortgages guaranteed by the government; they don't own ANY fannie/Freddie bonds...they make money off the spread between what they borrow at and what they lend at -- leverage isn't a factor...their only risk is in the fluctuation of the spread and prepayments.