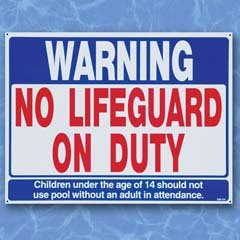 When I was in Naples last month, I had the scare of my life.

I was at the pool with my kids who were playing on the steps of the shallow end. The water went to about 4 feet deep so my little ones (ages 2.5 and 4.16), who can't exactly swim yet, were limited to the first 3 steps.

I had my trunks on and was about to go in with them. Then my achy back reminded me that I hadn't sat down all day. So I pulled up a chair to about 6 feet from Little C-Nut and Princess C-Nut and opened an old Forbes magazine.

Of course I barely *heard* him. We parents become deaf to the incessant whining of our kids. Then a second or two passed, I looked up and couldn't see my little angel.

I dove in and scooped her out. It wasn't until I grabbed her that I could see her struggling, kicking away. I picked her up and her stomach seemed full of water. Now, her eyes were open and she was breathing - but that didn't matter. I started screaming for someone to call an ambulance. The world seemed to stop turning. Within moments, a throng of people came out including a couple of nurses. Safety is the real benefit of living in a dense community.

Again, my daughter was breathing and her eyes were open. A nurse examined her and tried to calm me down. You have to understand, I have no idea how long she was underwater. It could have been 5 seconds or a minute. It seemed like just a split second that I took my eyes off them but I was involved in a conversation (about something stupid like UCONN) and I could very easily have not looked up for a couple of minutes. What if my son hadn't alerted me? What if he was playing at the other end? He's only 4.

Do you know how long it takes to drown? I certainly didn't.

So an ambulance came, they checked out my daughter, asking me over and over again, "How long she was under?". Obviously I had no idea. I wasn't timing her submersion.

At that point you still have to go to the hospital for more tests, and to make sure there's no water in the lungs (aspiration risk?).

Now I was really shaken up. I generally watch my kids like an eagle-eyed hawk. I've just got to be one of the most Captious fathers on this over-heated planet. But all it took was a second or two - a turn of the head for me to have the scare of a lifetime. I definitely learned, and y'all should take note, that *six feet away* for my chair was too far. From now on I'm going right on the edge and the magazines and conversations will have to be delayed.

It wasn't until about 4 hours later, while the doctor was discharging my Princess that I got an iota of relief.

I was badgering him with questions and if I didn't I wouldn't have learned this:

So, again, I had no idea how long it took to drown, nor did I have any idea how long my daughter was underwater. She may very well have been under for a while and simply held her breath. My Princess is one tough little cookie.

Though her Dad was a complete Moron that afternoon.

Vaguely, I remember I made a non-small fortune that day with my trading positions but in backdrop of the day's other events - what the h*ll good was that? I had real trouble sleeping for the next couple of nights.

Another unfun aspect of this ordeal was calling my wife up in Boston to report (and ask for HMO information). I actually wanted to blog the incident right away but my wife wouldn't let me. She was concerned how frantic the post would make her mother, my MIL. Of course this post is a public service message to parents - and I would be remiss not to share.

The first day we arrived at the condo we went to this very same pool. There was a young girl there, 2.75 years old, with her mother. This kid freaked us out. She could swim the length of the pool - doggy paddling anyway. She would go under and come up gasping for air while her mother was at the other end of the pool, mindlessly doing her own thing. I asked the her about her daughter,

CaptiousNut - How old is she? Is she a swimming prodigy or something?

Mom - She'll be 3 in April. No. She's just very aggressive. All I did was take her to the pool everyday....

Now this is a Florida/Southern phenomenon. Apparently kids really can swim at a young age. They just have to learn to hold their breath when they go under, not panic, and then surface for air.

So my kids were talking about this *Lexi* prodigy all week long. They kept talking how she could *swim underwater*. Maybe that put the idea in my daughter's head to try the deeper water, maybe she slipped, or maybe my son pushed her. Point of fact, my son watched an episode of Caillou - the PBS cartoon - 1.5 years ago where Caillou just jumped into the deep water at a lake to try to swim. He got a nasty mouthful and so did my son when he tried to emulate him at Crystal Lake in Newton, MA.

So, as we well know, kids are ambitious apers. We need to teach them to swim early and keep our eyes peeled. Mrs. C-Nut must have said *swim lessons* to me fifty times the next two weeks. And she had me looking all over for *swim jackets* for the kids - which weren't anywhere to be found at that time of year.

Though we haven't started swim lessons yet, I did just get one awfully big *parent lesson* that shook me to the core.
Posted by CaptiousNut at 12:41 PM

Your kids are old enough to swim.

They should have been wearing floatation gear.

Six feet is plenty close enough if you pay attention.

That kind of thing IS scary. Every parent goes through or sees something like that.

Yeah I am kind of against the floatation gear. I don't like the *false confidence* it can induce.

I've definitely heard a few similar stories since the incident.

Many many kids drown every year. I have never heard of one drowning while wearing a floatation device which caused "false confidence".

The kid wears a swim jacket or *wings*. They use them to jump off the diving board and swim in water over their heads.

Then, they try the same stuff *without* the gear - when no one is looking.

I've seen 3 year olds in 10 feet of water with those floaty bathing suits on where the suit was practically falling off (over the shoulders). That to me is scary.

I've also heard of kids with boogie boards getting pulled out with the current. In that case the board has gone from helping to hindering.

Don't worry we're hitting the pool for instruction this Friday!

Hey thanks for the informative post, Swimming classes should be something that a person takes up when young. Well I guess an adult can also take up swimming lessons. Never too young to try!