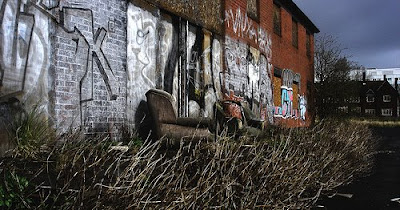 So how much do levered ETFs actually decay? I ran a few examples on paper, then computed the formula.

Consider the example of a two day move in A where it drops 2% and then the next day retraces completely back to 27.00.

In that case, Z, the double short, would rise to 120.00 on day one - and then fall to 93.33 on the underlying's retrace. So after a two days of net-flat trading, the double short has just gotten hammered, losing 6.66% of its value.

Lemma - Given an underlying A and its daily compounding double inverse Z, a drop of R-percent which retraces fully the following day will DECAY Z by:

In other words, the initial drop can't be greater than 33%. Taylor will explain why in the comments.

Time for homeschool to open. This discussion will be continued later.
Posted by CaptiousNut at 9:15 AM

that explains, as you were saying earlier, why ETFs aren't suitable for volatile markets. Is there some way you might be able to work the VIX into the calculation as well? I was thinking that that might be able to tell you when the volatility will do you in. I just got up so if this doesn't make sense, I'll try again later.

Further, I saw a similar conclusion on ETFs from Goldman Sachs in either the Financial Times, WSJ or NYTimes...can't remember which but I've been trying to track down a link to post.

My broker told me there were about 1000 shares of SDS and SSO available to short. With such a small number, the trade could be closed out without warning.

They have PLENTY of shares to short. They are partially lying.

Ask them how much you have to pay (10% interest) to borrow some shares. What they are doing is lending to the big boys; they are lending to whomever pays the most margin interest.

Or, buy a deep put like I did with XHB - they may let you stay short after expiration. Or sell a deep call. You won't have *pay up* too much.

Not sure, I did some math and a drop of 34% for the original stock seemed to work out okay. However, if the original drop is 50%, then the retrace is 100% (a doubling) so the inverse would have to lose -200% and that isn't possible.

What am I missing here? I'm sure the answer is obvious, but alas...

There's gotta be some bound whereby the retracement results in a 100% or greater loss. But 33% didn't seem like it was it.

Here is yet another article describing leveraged decay: