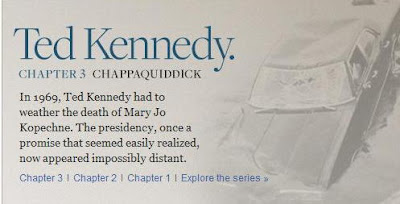 Thankfully, Ted Kennedy is not only on his way out of the Senate, he is dying.

And, the Boston Globe is running a 7 day hagiography of this imbecilic son-of-a-bitch.

Today they dealt with the little issue of *Chappaquiddick*. That was when Teddy got drunk, drove his mistress (one of them anyway) into the Atlantic, saved himself, tried to cover it up, got off due to his political connections, and then continued his life as a serial liar. I've always had a vague idea what happened, but just now reading the surely whitewashed Wikipedia entry I am even more disgusted.

Anyway, without delving too much, because I can't bear to read the Globe's apologia, the tone of the article is disgustingly all about how this poor woman's death derailed Teddy's political ambitions. Seriously.

On a humid Friday in July of 1969, as his plane took off from Boston bound for Martha's Vineyard, Senator Edward M. Kennedy seemed locked in a sure, unstoppable ascent to the White House....

The Globe, sneakily slimes Mary Jo Kopechne; they slutify her as *ambitious*:

It was, on the surface, a Camelot-style gathering, of older married men and younger, unmarried women — but in an oddly modest, remote setting, with women who were unusually skilled and ambitious.

Ambitious like Monica Lewinsky? Well that is the innuendo I infer; and what the Globe wanted to imply.

Kennedy's story has not changed in 40 years: He was confused. He thought the ferry was the other way. He turned right.

And the lying template of agitprop has changed in 40 years either.

This from a newspaper that while it forgave Teddy for driving drunk, killing a young woman, this is the same newspaper that goes apoplectic over bigger beer cups at Fenway.

You can see the video of Ted lying here. 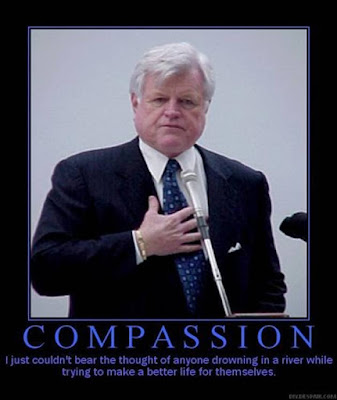 Did he really say that during the Amnesty vote?

See also Holier Than Thou - Marginalizing Extreme Moderates.
Posted by CaptiousNut at 9:03 PM