My main man, John Gatto, has a new book out. I just ordered it yesterday and eagerly await delivery. Here's his description: 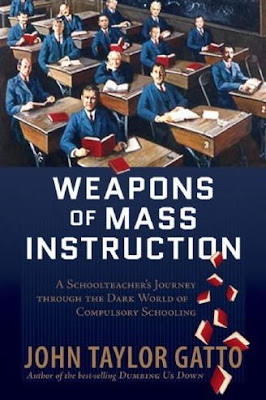 Here is a demonstration that the harm school inflicts is quite rational and deliberate. The real function of pedagogy is to render the common population manageable, remove the obligation of child care from adult workers so they are free to fuel the industrial economy and to train the next generation into subservient obedience to the state.

John Gatto shows us that Ivy League schools do not produce the most successful graduates, some of the world’s richest entrepreneurs are high school drop outs and Thomas Edison, John D. Rockefeller, and Andrew Carnegie didn’t finish elementary school. An education matters desperately, but spending a fortune on college fees will not get you one.

Filled with examples of people who have escaped the trap of compulsory schooling, Weapons of Mass Instruction shows us realization of personal potential is not possible within the system of compulsory schooling. That requires a different way of growing up and learning, one Gatto calls "open source learning." In chapters such as "A Letter to Kristina, my Granddaughter"; "Fat Stanley"; and "Walkabout:London", Gatto gives us a window into a different reality.

You can order the book directly from his people - or through Amazon.com and whatnot.

If you have, or are planning to have, kids you'd be an a$$hole and a child-abuser not to spend the $25 and at least let Gatto's insights penetrate your closed, small mind.

I've mentioned Gatto several times in my 1,100 posts now. Click here.
Posted by CaptiousNut at 11:40 AM