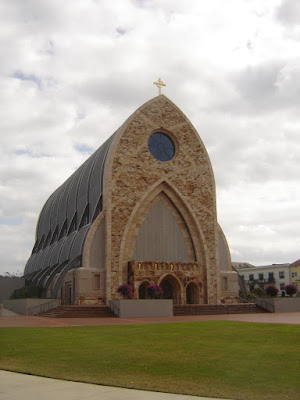 One aspect of my Naples trip that merits a mention is the palpable difference in spiritual culture - from the Northeast anyway.

The radio dial in southwest Florida is filled with contemporary Christian music and preacher men. There's absolutely none of that to be found on my FM dial in Boston. I listened to quite a bit of it throughout the month. If y'all recall, my current reading project is the Bible. I'm about two thirds of the way through it and hope to be done before summer. I found the radio sermonizing to be quite soothing and also a very helpful *field* complement to my textual study.

Also, seemingly every non-'snowbird' I met down there tried to get me to come to their church. This is the true definition of *evangelical* even if today's dictionaries have *characterized by ardent or crusading enthusiasm* as its sixth listed meaning. It's pretty unbelievable how pejorative that term is up North; heck, it's essentially an epithet. But let's be scientific here. I've lived in Massachusetts most of my life and never once did anyone ever invite me to their church. Never once did I witness anyone at any of the several Catholic churches that I attended *bring a friend*. Never once did I even hear a priest encourage parishioners to do so. There's simply no *ardent or crusading enthusiasm* for religion up here. If I haven't ever met a so-called evangelical, then I doubt many of the rest of the these Massholes has either. As such, the epithet has zero basis in personal experience. To a New Englander, an evangelical may as well be a martian!

My friend who lives in Naples is what I would call a "real Christian". One night at the bar we got to discussing *charity*:

CaptiousNut - Charity is one of my serious weaknesses. Outside of confiscated taxes, which get redistributed to the *needy*, I don't give a nickel to anyone. I'm cynical. I think all these charities are scams....

ChristianFriend - Well, what about at church?

CaptiousNut - I put $20-$30 a week in the collection basket. You know what, when I think of it, we did *adopt* one of those kids in Africa. My wife wanted to do it....it costs like $35 per month. So there's my charity - even if I think the money probably gets partially stolen.

ChristianFriend - You have ONE KID? We sponsor EIGHTEEN KIDS!

ChristianFriend - It costs $600 per month.

Now I was dumbfounded. My buddy doesn't have near the income or means that my wife and I have. In fact, he's got some real looming financial problems (i.e. adjusting mortgages). Not to mention he's got 3.5 kids - one of whom he just adopted from Guatemala.

In describing my buddy and the rest of the *evangelicals* I met to my wife, I said, "As Christians, they walk the walk..." - as opposed to me and the rest of my charading New Englanders.

Getting down to Naples for the month of January was certainly fun - but it was also a great experience. It's important for me and my family to be ever mindful that the world is indeed a very big place; that it's so much bigger than our town and its 30 minute driving radius. (There's also something called roadschooling - whose definition, if you can't infer it, you can discover by clicking on the link.)

Very much worth reading, and re-reading, is Will Durant On Religion.

[That pic at the top is from Ave Maria - the University/planned-community just east of Naples that was founded by the Domino's pizza tycoon.]
Posted by CaptiousNut at 11:46 PM

Email ThisBlogThis!Share to TwitterShare to FacebookShare to Pinterest
Labels: religion

What your friend does is esteemable, until he fails on his personal finances and joins the charity rolls himself.

Then, he turns into a wastrel and a spendthrift. That's the problem with this mentality... too much worldliness, not enough turning inward to make sure one's own boat is seaworthy...

He's not at that point by any means. He's just not *flush*.

I think one would be hard pressed to find many people on the welfare rolls who got there from too much charitable giving.

People that give a lot are troopers and usually appreciate whatever it is they HAVE. It's quite hard to *give* without the premise that you have *plenty*.

I doubt your friend has a "problem" with his "mentality".

I, and most people I know, could and should give more to the charities we believe in.