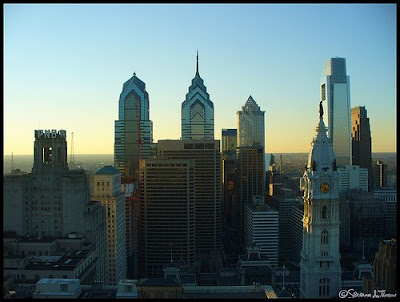 You can't really appreciate it from this picture but the new Comcast Tower ruined the Philadelphia skyline. We had our first glimpse driving up I-95 last Friday night. [My wife and I met in Philadelphia where we both lived some 13 years ago.]

It's the tall building to the left in the second pic. In fact it's the tallest building between NYC and Chicago at 975 feet.

If they had made it equal in height and similar in style (pointed) to the Liberty Place buildings, it mightn't have had such a damaging aesthetic effect. I don't really know.

Click here to read an interesting *curse* upon Philly sports teams from the erection of One Liberty Place - the former tallest building in town. 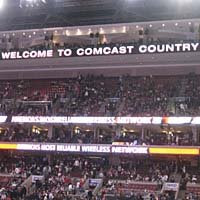 I may be *stuck* with darned Comcast (as the only Cable TV/Internet option) here on Boston's South Shore, but in Philly they really are subjugated by Brian Robert's massive Comcast ego.
Posted by CaptiousNut at 8:04 PM

Aesthetic considerations aside, and though you may prefer One Liberty Place to the Comcast Center's admittedly stripped-down look, the latter is nevertheless held responsible for breaking the "Curse of Billy Penn," invited upon the city by the construction of One Liberty Place in 1987:

"The curse evidently ended on October 29, 2008 when the Philadelphia Phillies won the 2008 World Series, a year and four months after a statuette of the William Penn figure atop City Hall was affixed to the final beam put in place during the June 2007 topping-off of the Comcast Center, currently the tallest building in the city."

You can bet that, had the Eagles reached and won the Super Bowl, the Comcast Center would have been forever canonized in sports lore :)

Personally, I find the Comcast Center to be one of the more stunning and well-finished buildings I have ever seen--both inside and out (full disclosure: though I do not work for Comcast, I do work in the Comcast Center).

But whatever one's preference, it is a sign of Philadelphia's emergence (albeit slow) as a top-tier city, and that's something any Philly resident, past or present, should be happy about!

I love Philly. I spent 9, very formative years there.

As a city it's certainly underrated. It should be above Boston but below Chicago.

Maybe the skyline just looks bad from the highways on the east. It really looks off-center and all jammed up.

Philly won't emerge until it attracts some industry other than lawyers who shuttle back between NYC and Washington DC.

Though I would move back there in a second - if I had to.