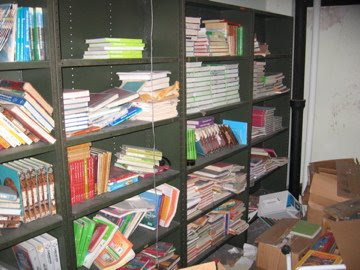 Last night I randomly met an employee of Houghton-Mifflin the textbook publisher. I asked how business was, "terrible," he responded. Apparently all the municipalities are (finally) cutting back purchases of those *redundant* new editions. This is not an industry I am by any means on top of - but I wasn't surprised to hear of its woes. It's looks like it's *toast*.

So, what-do-ya-know, today the Boston Globe put out a lengthy, comprehensive article on this very company titled - Publisher Teeters:

The ice is thinning under Houghton Mifflin Harcourt and Barry O'Callaghan, its freewheeling, 38-year-old, Irish owner.

It's the latest chapter in the convoluted recent history of a grand old Boston name, a publishing institution since 1832. As recently as 2001, Houghton was a strong independent company with thriving K-12 and college textbook businesses and a stable of such best-selling authors as Roger Tory Peterson, JRR Tolkien, Philip Roth, and Rachel Carson. It has had three owners since then, none of them book publishers. Although it's unlikely that Houghton would disappear, default on its debt could mean a fire-sale breakup and a new owner or owners who could move all or parts of it from Boston.

Moody's last month reported that Houghton, with a debt load estimated at more than 10 times gross earnings, is "a likely default" unless its loans are renegotiated. S&P last month placed parent EMPG on its list of weakest links - companies in greatest danger of debt default. "The debt level is our biggest concern," said S&P analyst Hal Diamond, "given the state of the economy and state budget constraints. While they can reduce costs, they can only go so far."

The article was good reading. And the comments, thanks to many *former employees* were pretty feisty. So give it a whirl if you're idle tonight. It's hard to imagine textbook publishers going broke given the costs they pass on.

But keep in mind that high revenues are no match for the econo-illiterate, political wordsmiths that run the book biz.

So in the last two days I've bumped into a Madoff victim and now a soon-to-be-unemployed Houghton-Mifflin employee.

Y'all should aim to keep clear of me and my curse!

Though, truth be told, the odds that whomever I meet next is in a teetering business are pretty darn high right now.

(I touched, tangentially, on textbooks in Sheep To Slaughter - one of my better posts from when I was a worse blogger. Can't believe that was over two years ago. I can't believe I've known Taylor that long!)
Posted by CaptiousNut at 9:15 PM

It sure is hard to believe we've known (known of?) each other for two years. It feels like only yesterday when I was a wee journalism student getting your insights in my little trader profile story.

I still think you should contribute to DoF. But I know you're committed to this great undertaking and as a result that will never happen.

I can't wait to see these massholes go out of biz... the textbooks they write are revoltingly ignorant.

It does seem like just yesterday that you were a wee journalism student!

Textbooks should be *bailed* out.