There's No One To Blame...Move Along 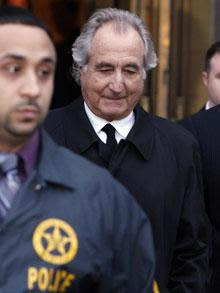 Rye Investment Management is toast. The division of hedge-fund firm Tremont Group Holdings seems to have lost virtually all of the money it manages to Bernard L. Madoff, who apparently ran the world's biggest Ponzi scheme.

No matter how you slice it, Tremont will get burned as well: Rye accounts for more than half of the assets it manages.

Tremont has two asset-management divisions, Rye and Tremont Capital Management. Rye runs assets of $3.1 billion, virtually all of it invested with Madoff. Tremont Capital has a bit of exposure as well, $200.0 million, or 7.0% of its $2.9 billion total, a source with knowledge of the company told Forbes.com.

It isn't a sure thing that all of the money invested with Madoff is lost, but it's a pretty good bet. Last week, Madoff allegedly admitted that he had lied about years of steady profits and that he had bilked investors out of a mind-boggling $50.0 billion.

Tremont said it had "exercised appropriate due diligence in connection with the Madoff investments." Indeed, it claimed the situation was not within its control. "Tremont was victimized by not just a person but also a scheme and a complex process designed to deceive individuals and organizations, managers and analysts – including some of the largest, sophisticated financial institutions in the world," said Tremont spokesman Montieth Illingworth.

When asked who was responsible for Rye's investment strategy -- which, essentially, consisted of giving Madoff all the money -- Illingworth refused to comment. In June, the company said that the previous Tremont Group chairman, Robert Shulman, who had been running the Rye unit as part of his transition to retirement, had made way for Jim Mitchell, who previously worked in the firm's London office.

Hah! Tremont claims to be *vicitmized...by a process*.

Then they conveniently blame a since-gone chairman for TODAY's investments.

So, just to be clear, when Madoff posts *paper profits* over many years, Tremont's refined crooks take their cut, BUT when the sham is revealed, all of a sudden they are *victims*.

I just so happened to bump into a higher-up from Tremont very recently. We got to talking about the markets and this clown instantly displayed staggering ignorance. He started in by blaming *mark-to-market* accounting for just about everything - yet he couldn't even regurgitate Steve Forbes' sophistry. This guy just didn't know anything about financials or the markets in general. To give an example, he insisted that no one could buy distressed debt because of mark-to-market. I tried to explain to him that mark-to-mark might pose problems for legacy debt holders BUT NOT FOR NEW BUYERS TODAY. After my lecture, I jabbed, "If stuff yielding 18% is really a good, performing investment, then why don't you buy it with your personal funds?"

So why is this Moron in charge of allocating billions of investor monies? Because he's a typical New York poseur. He spends a lot of money on clothes, smokes expensive cigars, talks about his solar panels, and generally tries to act like he's hot sh*t. The guy puts on all the airs of a fifth-generation blueblood - yet in fact he went to a poopy local college and grew up on the wrong side of Long Island!

Yet, his minions advised him to dump much of the junk last spring a much less-distressed prices - and he refused to do so.

That poor decision couldn't possibly have been HIS FAULT. Just ask him.
Posted by CaptiousNut at 8:15 PM