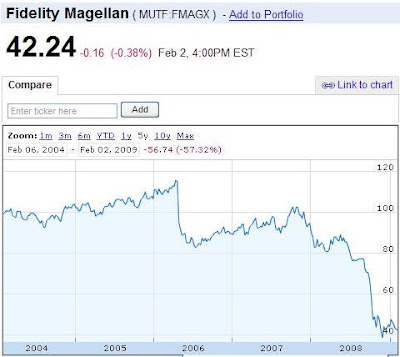 Round is likely to include FMR cuts
Fidelity Investments is expected to initiate a round of previously disclosed layoffs this week, according to industry executives who have been informed by company insiders, and the job cuts will likely include personnel from the company's FMR Co. investment unit.

The FMR Co. division includes analysts and managers who run Fidelity's well-known mutual funds, and it had been shielded from past layoffs after the company spent heavily to beef up its stock-picking capabilities. Crowley said the company now has about 500 analysts. One executive recruiter who has spoken with company insiders, speaking on condition of anonymity because Fidelity did not authorize the comments, said positions at FMR Co. will be eliminated this week.

Eric Kobren, publisher of an independent newsletter for Fidelity investors, said any cuts to FMR could indicate Fidelity's spending on new staff hasn't always paid off. "They've got to be very sensitive to the fact of how many analysts add value to the process. They spent hundreds of millions of dollars improving their staff, and the fund performance numbers have not necessary improved in line with the investment," Kobren said.

They pay their analysts and researchers a sh*tload of money - and for what?

If you read my other post you'll see what a complete Moron they have captaining this sinking ship - Skim Biz Update - Fidelity Investments.

This clown, Harry Lange, piled into my biggest shorts in September - BAC, WFC, and JPM.

And here's what they've done over the last 6 months:

Fidelity skims like .7% off each equity fund to, I guess, *create jobs*. They have about $1.3 trillion in assets. So let's say they skim about $500 million off (some monies are in lower yielding - for the firm - bond funds) every single year. What exactly has all that *research* wrought?

Eric Kobren, quoted above, wonders how much value additional analysts add to the funds' performances. I wonder, check that I KNOW, that not even one analyst, as they've hired them, constipated MBAs and whatnot, adds ANY VALUE. There's no *adding* anywhere in this Fidelity narrative - just subtraction and division.

Over the years I've met many analysts and read who knows how many *reports*. I can't say I've ever been impressed or edified by any of these overpaid clowns.

It's not *research*, it's marketing. These big mutual fund companies aren't anything other than an elaborate, sophisticated scheme to exploit the naiveté of the masses.

Now, we can begin a whole new discussion about whether or not Fools and their money *should*/*will always* be separated. That's fine.

But let's get the premise about what these skimmers are really doing, let's get that straight first.
Posted by CaptiousNut at 10:45 AM

I wouldn't TRADE the profits I made last year (from TRADING in and out of the market of course) for a "hold and pray" investment methodology that involves dollar cost averaging into the indices or into mutual funds that underperform the indices.

Anyone thinking that "hold and pray" will pay off in the long run should examine a chart of the Nikkei 225. Yes, folks, stock indices can get indeed stuck in a multi-decade bear market that may not recover before it's time to retire.

Anyone who didn't cash out of the indices near the top in either 2000 or 2007 missed their chance if the goal WAS to retire from buying and holding the indices. I also don't think we're anywhere near the final bottom. We could easily hit SPX 600 and that's probably a BEST CASE scenario.

I've come to the belief that mutual fund investing, er dollar cost averaging, has as its principle selling point the possibility of *lazy wealth creation*.

SPX 600 or 650 seems to be the consensus among bears. Look for an overshoot.