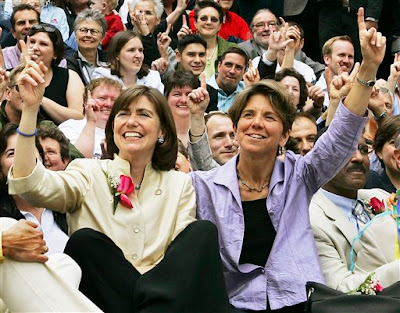 BOSTON (AP) - A lesbian couple who led the fight for gay marriage in Massachusetts has filed for divorce. Julie and Hillary Goodridge were among seven gay couples who filed a lawsuit that led to a court ruling making Massachusetts the first state to legalize same-sex marriages in 2004. The couple became the public face of the debate in the state and married the first day same-sex marriages became legal.

I propose a Constitutional amendment to define divorce as ONLY the disunion of a man and a woman.

If these people want to get married so badly, then we ought to scare 'em off with finality!

Let's put an end to this silly, symbolic issue....appropriately through a back-door.

Query - Who gets to keep the last name "Goodridge"? They're both wearing earrings....must we presume upon hair length?
Posted by CaptiousNut at 6:24 PM

Incidentally, I'm curious if you believe homosexuality is a choice (lifestyle) or genetic... again, I can't really say I have a definitive stance either way.

A tax system that wasn't so stupid would remove the need for government to say anything about any marriage. Why marriage, even between normal people, must be sanctioned by the most incompetent band of MORONS to ever be assembled is beyond my comprehension.

Gays want to marry, fine. Do away with the different filing statuses and we can talk about it.

I fully support your Constitutional Amendment that disallows same sex couples from divorcing.

A truly *liberal* position on marriage would be to take the State completely out of it.

I have more to say but am strapped for time.

I am so sorry. I had no idea...with you talking about your girlfriends and everything. I guess I should have picked up on the signs!

If nothing else-WTF does the state have anything to do with marriage anyway. Seems to me the libertarian stance is to live and let live on this one. Certainly marriage should not be subsidized or penalized by the government. I can see some legal rights needed for partners-maybe civil unions should be the government standard. Marriage is in the eyes of God and each church is free to have their own stance of course. That whole separation of church and state thing.

I employ 1/2 of a civil unioned gay couple (female)-they are a blast at parties. Here in CT they can get married but I guess they haven't bothered to go through with that yet.

I could care less. Keep the government out of our bedrooms...
Kfell

One more comment for you Massholes. IF your state is stupid enough to come to NH to collect MA sales tax from NH businesses selling goods to Massholes, you better come armed and wearing body armor. Is Duval really this Fing stupid???
Kfell

I can't believe you employ someone because they are a blast at parties!

Most gays don't care about *gay marriage*. It's a symbolic issue for its belligerent wing - and for pandering pols. There's scarcely a legal issue. Some gays say that without legal marriage it makes it hard for them to *inherit*. Puhleez, all sizable wills are contested - heterosexual marriage or not.

Whatever I may think about gays, I don't presume they are stupid, like high taxes, or are enamored with socialism.

The best was last election, when Obama energized minorities to vote, and they all voted down gay marriage on the referendums - leaving pointy-head socialists perplexed.

How could we win the elections buy not get our referendums passed???

Why can't three people get *married* then? Why can't someone *marry* their dog?

My guess in response to your two questions would be:

Does that make sense or am I way in outer space here?

Say someone wants to "marry" their dog, their own offspring, a 9-year-old, etc., isn't the only reason that YOU might have to accept that marriage because the State says so? If the State had no say and no authority over what is or isn't a marriage, wouldn't you be free to ignore and condescend the marriages that you don't agree with and consider just?