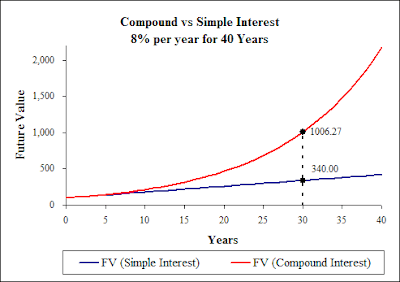 First read - On The SRS.

Here's the salient point Funny Circus Bears made in the comment thread:

Just look at the SRS alone: The corresponding long opposite of the SRS is ROUGHLY represented by the IYR, which is down 40% over the last year. That would make one think the SRS would be up ROUGHLY 80% (2x's short) over the same time period. In fact the SRS is DOWN about 40% - That's some slippage!

Now I freely admit that I didn't fully grasp the full, destructive value of the daily compounding of reverse ETFs until a few months ago (when I read about it on a blog). I had been trading them (SRS, SKF, EEV, and TBT) very profitably and really never did full due diligence. What the heck, I have about 1.5 hours a day at my computer because of my two young kids and family priorities.

But it is true, the *slippage* from range bound trading will annihilate long-term holders of the ETFs I mentioned above and our foundering trade/investment in DXO. Just do the math on how much oil would have to rise for that thing to get back to 10. It ain't looking too promising. I will buy more at 1.50 - perhaps doubling my position; but then my exit targets will drop considerably.

However, there is an upside to these *double-shorts*. Compounding is your friend when a security makes a *straight* move. It's not sufficient to just look at *year-long* investments - we must examine the behavior of these ETFs during other time intervals.

The indisputable conclusion from FCB's point is that one would have been sooooo much better shorting the IYR directly - over that period - than utilizing the SRS. I'm sure the savvy Wall Street trading houses even paired the two - short IYR and short SRS as an arbitrage spread. I'm sure there has to be some whacky volatility skew in the SRS options as well.

Y'all should check my numbers, but here's what I came up with:

So clearly, the SRS did at least a little better (66% vs. 60%) on a percentage basis than the prospectus advertises. It didn't do that much better, admittedly.

But if we look closer, at the full set of trading opportunities over that period:

What that means is that when the SRS hit its magical 295.00 plateau, it was up 127% from the 11/5 close. At the same time, the IYR was only down 40% from the 11/5 close. In other words, again we have considerable *outperformance* as the SRS should have tracked only 80% higher at that moment.

So it looks like these ETFs, while flawed horribly in choppy markets, do actually provide a steroidal boost, real leverage, in the rare instances that the underlying cliff dives. In the period I just highlighted, the IYR was down (SRS up) in roughly 9 out of the 12 trading days.

But how good could this compounding really get? Let's do the math on a 9-day-straight decline in the underlying Dow Jones Real Estate Index. The first table shows the theoretical effects on daily 1% drops and the second demonstrates daily 5% drops. 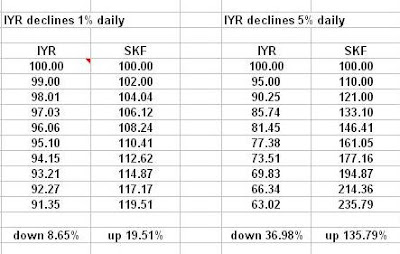 With the 1% daily slides, you can see that after 9 days the SRS only *outperforms* slightly. With the IYR down a cumulative 8.65%, the SRS finished up 19.51% - only a smidge better than the 17.3% one might roughly expect.

But, in the case of a shellacking, in the case that REITs get whacked 5% everyday, for 9 days straight, the results are much more favorable. With the IYR down a cumulative 36.98%, the SRS finished up a whopping 135.79% - a whole lot better than 73.96% a non-prospectus reading, un-Captious investor might expect.

Look at it this way, SRS holders are better off getting gradual, steady declines over time than big single day drops. If the IYR dropped on day one 36.98%, the SRS would only rise from 100.00 to 173.96 - far short of the 235.79 close it would reach after the above hypothetical prolonged slump.

This is what they mean when they say that leveraged inverse ETF holders are betting on *path* as much as direction.

So what have we learned? Does the upside from potential unbroken *trends* make up for the slippage of trendless times?

I do want to add a few more things.

First, though I haven't vetted it completely, I think securities that move with less volatility, e.g. the long bond, I think their inverse, levered ETFs will have less slippage. This would effect TBT and my sizable position in it. Thought I really need to crunch some more numbers to test my hunch.

Secondly, it's not so easy to short the IYR or the entire basket of REITs. Many are *hard-to-borrow*. And while professional traders can easily input basket orders of 82 stocks - small traders either can't, don't know how, or will get killed on commissions. So with that in mind, we might forgive a trader for betting with imperfect proxies.

Third, let the record show that back in September 2008, when the deflecting, scapegoating thugs of Big Government changed the rules in the middle of the game, when they banned *short selling*, if it weren't for my ETF position in SKF, I might have been totally destroyed. At that time, the SKF traded at premium to its NAV because of the short ban. It hung there for quite a while, until shorting was re-permitted.

So the dude who shorted the basket of bank stocks directly took a larger bath from the ban, AND he may have even had his stock *called in* which would have been disastrous. I also had a direct short position in Wells Fargo at the time - rather large to boot. That POS printed up to $44.69 a share (today it's 14.30). I was so beside myself that I couldn't even look at my account; I was scared to death that they called away my stock. Luckily they didn't.

We'll talk some more on this vitally important issue. I regret that I haven't addressed it previously and that it may have led to some piggy-backers losing hard earned dollars.
Posted by CaptiousNut at 3:11 PM

I'm going to have to read and re-read this a bit to fully digest as I'm simply not good enough with the numbers and not even fully cognizant of how these ETFs that I own work, but I think at this point my contribution to this discussion would be to note that I'd be making much more (short of commissions) on my UltraShort positions if I had the discipline to sell them at the end of every big-gain day and the buy them back cheaper and thereby "compound" my gains.

But I'm not that nimble as I use ScottTrade so it costs $14 to get in and out each time (or out and in as the case may be) and I don't always have the convenience while at work of monitoring the stock near closing time and executing buys and sells.

I feel like I need to just take the meager money I've made (finally... got hammered on some stupid GLD/SLV trades back when the two metals fell and then traded sideways for months during the summer) and get over my fantasy of being a big shot, on-the-side trader guru. Ugh, if only my ego weren't so big...

I think the other thing motivating me is I feel like I need to do less risk-taking for short term gain and do more planning for the long term in which this system completely buckles in on itself. I understand the economics well enough that I know I'll be absolutely kicking myself if, say, the dollar collapses and I didn't have some gold and silver coins tucked away and I become a taken-by-surprise clueless Obama-lovin' schmuck like everyone else.

I'm angry at the world right now, and frustrated with myself. I wish I were better at math like you.

I too believe - "Does the upside from potential unbroken *trends* make up for the slippage of trendless times? Probably not."

Which is why I only day trade levered ETF's.

FYI here are all the 2x and 3x leveraged ETF's that have 3 month average daily volume of at least 500,000 shares. If you daytrade, there's little reason to watch anything besides these 30-some ETF's:

You don't need gold. You won't need it until you have substantial fiat assets to hedge against.

So you trade a lot, huh?

When are you going to give me some tips? What are you doing these days?

Is anyone else bombarded by the stupid prospectuses on these funds as I am? It seems like every other day, I get a new one in the mail. Is this a conspiracy to keep the mailmen employed?
Kfell

I don't think I understand why I must have "substantial fiat assets" to hedge against before it makes sense for me to own gold.

And what if I have a semi-substantial amount? Or what if I am investing on behalf of someone who does/did?

I think your broker may have an option for you to *opt out* of mailings - for some stuff anyway.

I'm sure we've had this discussion before.

If gold was $400 I would say *get long*. I just think that while it may drift up from today's $978 to $1500 per ounce, that it doesn't have compelling risk/reward characteristics when compared to other *trades* I see out there. Of course I could be wrong.

If you are investing on behalf of a larger account.....then yes, gold is a good diversifier, obviously.

Okay, I forget you look at everything in the context of a short-term trade. I was speaking about the gold and silver coins from the perspective of "buy these, save them, don't trade them... ever"

My other point was that I just don't think I am able to pay attention to any of this stuff enough to play it short term anymore, either.

Less and less am I convinced that the "capital" markets of equity exchanges allow for any real "investment" in the traditional sense. It's all paper-shuffling and gambling... the most useful function of exchangeable ownership is to promote a change of ownership from the incompetent and less profitable, to the competent and more profitable, but as we've seen recently, somehow nitwit managers and executives remain in power for decades as they drive their respective companies into the ground and nobody on the shareholder side ever says "ENOUGH!" they just trade their shares to some other would-be opportunist sucker who watches his "investment" deteriorate before he ends up doing the same, the health of the underlying company be damned.