BC Converts To Catholicism 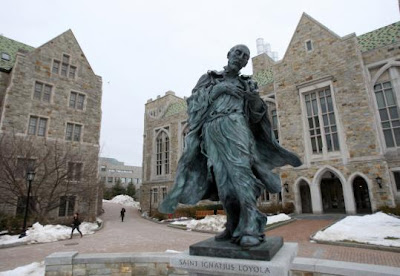 The Boston Globe today has an article on Boston College - how BC is adding religious icons to the campus to remind everyone, including itself, that it's a Catholic institution.

So, is a Catholic school adding crucifixes really a big deal? It is to the secular Morons running the Globe. They titled the article - Catholic Symbols Stir Diverse Feelings At BC.

On the plaza in front of Higgins Hall at Boston College, there is a new oversized statue of St. Ignatius of Loyola, robes flowing and his hand over his heart. For the university's nearby Newton campus, a large statue of St. Thomas More is being designed.

On each side of the foyer in Lyons Hall is a new mosaic, one depicting Dorothy Day, the founder of the Catholic worker movement, and the other Pedro Arrupe, a former superior general of the Jesuit order.

And suddenly, in all 151 classrooms, there is a Catholic icon, in most cases, a crucifix above the lintel.

I had thought the Globe was generally pro-diversity (of feelings)....hmmm.

Student reaction has been generally supportive, but among faculty, there is division over the appropriateness of the step. A meeting last month of arts and sciences department chairs turned into a heated argument over the classroom icons; a handful of faculty have written to the administration to protest, and some unsuccessfully circulated a petition asking to have crucifixes removed.

"I believe that the display of religious signs and symbols, such as the crucifix, in the classroom is contrary to the letter and spirit of open intellectual discourse that makes education worthwhile and distinguishes first-rate universities from mediocre and provincial ones," Maxim D. Shrayer, chairman of the department of Slavic and Eastern languages and literatures, said in an interview.

Can you imagine the stones of a Boston College professor telling the administration, telling his employers to remove religious symbols?

AND, the fact that they are Moronic enough think a crucifix *limits intellectual discourse* ought to disqualify them *intellectually* from teaching anyone - particularly in a college that costs over 50k per year now.

This article reminded me of a blog I wrote waaaay back - on a BC professor who was an admitted invert and communist. Read Self-Marginalizers.

A lot of real Catholics fulminate against the faux Catholicism of Boston College. And these same critics are likely to inveigh against the school's founders, those liberal Jesuits.

But the 465 year history of the Jesuits ought not to be judged by a present-day snapshot. Members of the Society of Jesus, as missionaries and educators, have done yeoman's work for Catholicism over the years. They forged new ground and sacrificed much while venturing into the scary frontiers of civilization Ad Maiorem Dei Gloriam - "For the greater glory of God".

So the Jesuits were far afield, in Japan, China, and the Amazon jungle where they took some license with the dictates from the Rome. They weren't *liberal* or *heterodox* so much as they were practical. Can they be forgiven?

They've probably gone too far - and are now circling back.

Disclosures - I went to a Jesuit high school that may as well have been a *feeder school* for BC. My wife went to BC; so did my sister. AND, just about every 3rd person I meet on the South Shore (of Boston) also went to BC.

I DO NOT consider it a good school - though everyone who went there or paid a tuition certainly does!
Posted by CaptiousNut at 10:51 AM