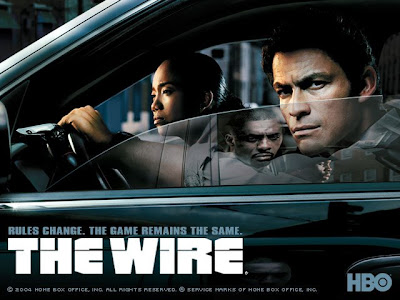 I started watching and really enjoying HBO's The Wire in the middle of Season Two, some 5 or 6 years ago. So I missed the first season - and even the last one because we no longer had HBO, which we've got back now.

Recently I've been watching Season One through HBO On-Demand and my zeal for the show has been reawakened.

You see, despite its riveting drama, The Wire is a foray into deeper socio-political and even philosophical matters. I'll let the creator describe in his own words:

Simon has said that despite its presentation as a crime drama, the show is "really about the American city, and about how we live together. It's about how institutions have an effect on individuals, and how ... whether you're a cop, a longshoreman, a drug dealer, a politician, a judge [or] lawyer, you are ultimately compromised and must contend with whatever institution you've committed to."[1]

I kind of sensed these undercurrents 5 years ago, but not fully - my mind was in a completely different place back then. No kids. I might not have even been married yet. It was PCN time - before the incarnation of CaptiousNut!

Allow me to elaborate on the show.

In Season One, a cop (McNulty) brings a drug lord to the attention of a judge, who then makes waves with the higher-ups. The police chief knows nothing of these thugs who are running half of Baltimore's narcotics and who are terrorizing whomever gets in their way. So rogue politicians made some noise and demanded the cops tackle these dangerous criminals. Instead of taking up the task with dutiful pride, the police commissioner goes apesh*t. First, he is pissed because this development, i.e. his ignorance and incompetence, made him look bad politically. He doesn't care one iota about the blood shed, children corrupted, or the justice unrendered. In fact, he makes it his prime focus to railroad the cop who *opened his goddamned mouth* and to sabotage the new investigative operation. Time after time in Season One, you see cops get into trouble for the most ironical crime possible, *doing police work*.

At root, The Wire is an exposé of the myriad failings of massive politicized institutions. Season One deals with cops and law enforcement. Later on they hit on politicians, unionized dock workers, public education, and more. Simon weaves all the themes and plots together, masterfully.

Read John Gatto's fulminations on Big Education, then go back and revisit The Wire. I promise the nuanced profundity you missed before will jump out and bite you!

Here's the opening scene from the pilot:

And here's a link to a video recapping Season One. If you haven't seen any of the episodes, don't watch too much of the recap; there's too much *plot spoilage*.
Posted by CaptiousNut at 12:26 PM

That first season was extraordinary. Haven't really seen much since.