Their Favorite Thing To Tax? 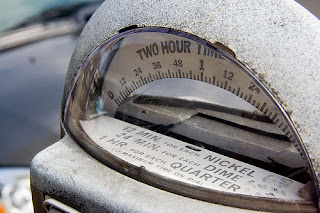 Yesterday morning, we took the kids to the Franklin Institute (as in Ben Franklin) in Philadelphia. It's a science museum.

I actually found a parking spot out front. The sign indicated that I could feed the meter for two hours. That, I could handle.

I put a quarter in and it jumped to 7 minutes. What? Is it broken or something? I put in another and it gave me a total of 15 minutes. Say what?

Then it hit me, meters in Philly now only get 7.5 minutes per quarter!

[Attention 'young coots'....y'all should be aware that everything, not too long ago, cost a mere nickel.]

I had to put $4 of quarters in to park for the maximum two hours. Luckily I had a Ziplock full of them because later on I had to dump another $4 into the meter.

You know what? I shouldn't have put any money in the darn thing.

"There's no way possible for us to handle all those meters," Philadelphia Licenses and Inspections Deputy Commissioner Dominic Verdi told KYW. "That would not be a priority to us.... We have X amount of people, we have to prioritize. What would be more beneficial to the consumer."

Question for Homeschoolers - When the parking ticket costs X dollars, I should be indifferent between spending $8 and 'not feeding' the meter - risking the fine. Solve for X.

Question for Government Schoolers - How many quarters are there in $8? [Hint - There are 4 quarters in one dollar.]

It doesn't well matter what the car is doing, whether it's being made, bought/sold, serviced, moving, or stationary....your friends at Big Government will find a way to tax it!

For another example of creeping tax thuggery, see my prior post - Stealth Inflation. This phenomenon is *geographically independent*.
Posted by CaptiousNut at 11:39 PM

In San Francisco a quarter will only buy you 6 minutes!

Nice tip about the certified meters.

Wow. It's converging on hourly rates for prostitution!