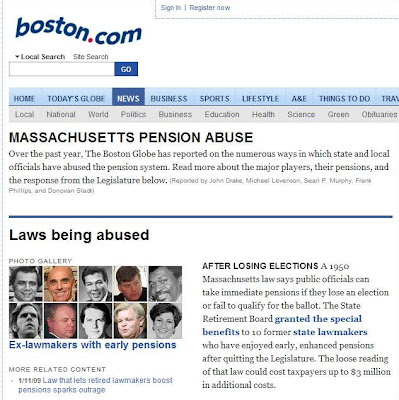 The de-fanged muckrakers of Big Media, there're all out there these days decrying *pension abuse*.

They are finally drawing attention to the fact that corrupt politicians and their cronies have been looting the treasury for years.

But big deal. These complaints are too little and too late. AND the focus of their criticism is dangerously off-point.

Clowns at the Boston Globe and elsewhere, by only attacking the worst examples, they are tacitly conceding that the bulk of government pension obligations are in fact nothing to be concerned about. No, we only need curb the *abuses*.

But guess what, the abuses are not the fundamental problem, they are merely the sympton of a larger disease.

And by shedding light only on the big little crooks, it sets up any forthcoming reform to be hopelessly narrow. In other words it'll do nothing for the financial viability of states or municipalities. Politicians will pass some nothing bill and say, "Hey, we curbed the abuses....now leave us alone."

In short, *pension abuse* is not golden parachutes for big wigs, the ABUSE is on taxpayers for the entire system.

There's just no reason why all government employees shouldn't be on *defined contributions* like everyone else.

Another thing that annoys me about Big Media coverage of this subject is the expression *unfunded pension liabilities*. They can't just say these pensions are broke - they are merely unfunded. I guess then, by that logic, that my Moronic landlord isn't a deadbeat criminal....he just has $4 million in UNFUNDED mortgage obligations!