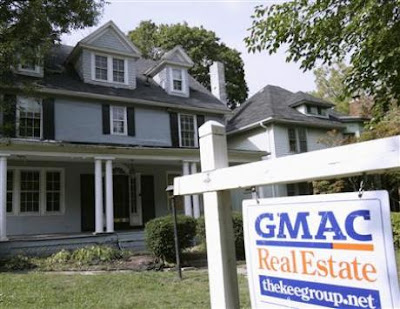 One wouldn't know that GMAC was *bankrupt* reading stories like this:

March 1 (Bloomberg) -- GMAC Inc., the lender majority owned by the U.S. government, paid Chief Executive Officer Michael Carpenter $1.2 million for the month-and-a-half he was employed by the company last year. The next four top executives got 2009 pay packages valued at $4 million or more.

Carpenter, whose full-year package would have been valued at $9.5 million, got a salary of $119,726 and about $1.1 million in restricted stock, according to a regulatory filing today. The firm paid Chief Risk Officer Sam Ramsey $7.7 million and handed $5.7 million to Tom Marano, CEO of mortgage unit Residential Capital LLC. Finance chief Robert Hull got $4.9 million and Chief Marketing Officer Sanjay Gupta received about $4 million.

GMAC, the recipient of $17.3 billion in bailout funds, is subject to rules of the Obama administration’s special master on pay, Kenneth Feinberg. GMAC, based in Detroit, said Feinberg granted permission to pay Carpenter, who replaced former CEO Alvaro de Molina in November, as much as $9.5 million last year.

Marano’s 2009 base pay of $2.6 million was determined by GMAC’s board prior to the company’s restructuring last May, and wasn’t subject to Feinberg’s oversight. His 2010 pay package was modified to comply with Feinberg’s ruling, the company said.

Feb. 25 (Bloomberg) -- Bankruptcy for GMAC Inc., the auto and home lender majority owned by the U.S. government, would have cost the government as much as $50 billion, the Treasury Department’s lead auto industry adviser said.

Sending GMAC into bankruptcy would have required the government to inject $40 billion to $50 billion into a newly formed company that would then lend to General Motors Co. and Chrysler Group LLC dealers, said Ron Bloom, chief adviser for the Treasury’s auto task force. Bloom spoke today at a hearing of the Congressional Oversight Panel in Washington.

At the end of December, GMAC received $3.8 billion in a third installment of government money. GMAC got $12.5 billion in two previous bailouts and almost $1 billion that was funneled through GM, which used it to invest in GMAC.

GMAC posted a $10.3 billion loss last year, driven in part by defaults on home mortgages. Analysts testified today that the best solution for GMAC and General Motors would be to place the lender into bankruptcy and sell the auto-financing business back to GM, which may suffer without its own in-house lender.

Going back to that first article for a second...

Someone tell me why *risk* and *financial* officers should be paid $5 million in annual salary when all they really did was procure billions from Uncle Sam?

I guess I'd feel more comfortable with their compensation if at least they were more aptly called *lobbyists* or something.

And recall that Thomas Marano who reaped $5.7 million last year - he has quite a blemish on his resume.

I don't care, in my book, if you take down an entire investment bank you should be *out of the game*.

Recall also that Marano brought along that meathead Josh Weintraub whom I ripped nicely on this blog - so nicely that his relatives took to the comment section to defend him.

Josh Weintraub - Round 2 With The Meathead

I Am A Lamb At The Teat

Josh Weintraub Hasn't Helped GMAC - So They Promoted Him
Posted by CaptiousNut at 3:05 PM