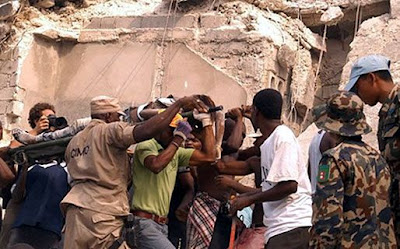 I have vowed to get my scumbag landlord back for all his harassment, attempted theft of my money, etc.

And I came up with a nice little offensive that I was all set to deploy yesterday....until I was seized by Christian guilt.

When that earthquake or whatever struck Haiti recently, I and everyone else in the contact list of my Moronic landlord received an email from him. He was going to be *fundraising* for a relief mission to his native Haiti. In fact, I received this solicitation RIGHT in the middle of my first *eviction war* with him!

Yeah, sure, I'll forward some money to a serial thief....one who already owes me money and is trying to evict me!

There were tons of people on this email - and two other messages followed - although I wasn't CC'd on those.

The last email thanked everybody for their *generous donations* and announced an additional benefit concert that he was organizing for *victims* - a concert that's to take place this weekend.

My dastardly plan was to take this extensive email list, and from an anonymous new email account....I was going to email EVERYBODY that he apparently knew a message along these lines:

I hope this *fundraising* effort is fully audited. (my landlord) is a prolific crook having stiffed banks, contractors, tenants, utilities, credit card companies, architects, lawyers, and God knows who else to the tune of millions. In fact, (my landlord) just filed for bankruptcy this past week!

And I'd attach a copy of last week's *midnight* bankruptcy filing.

How would you like to be him and have to face all these donors this weekend after they've been informed the night before from an email such as this?

It would probably embarrass the $hit of him. You see, not everybody knows the status his *business*. He fronts with smiles, $1,000 suits, and lies straight to everyone's face - "Yeah, business is good....Things are picking up..."

This was one of my best plans ever; I must say I even impressed myself with it. Hit him right where it counts, no?

My wife was in tears laughing at my conniving, "YOU SHOULD DEFINITELY DO IT!", she said.

But I just couldn't. The line *forgive us our trespasses as we forgive those who trespass against us* was ringing in my head.

My faith really compels me to turn the other cheek?

I guess now that I have all my money back, (i.e. security deposit and last month's rent) I have to really contemplate future antagonism. I don't want to cross the ethical line into his territory. 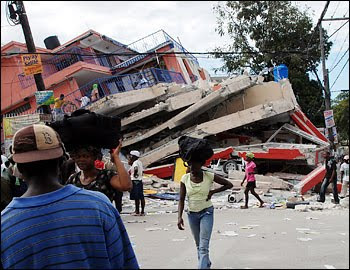 Maybe I should, when May rent comes due, just tell him that I sent the money to Haiti in his name?

For the prior installment, see - Eviction Chronicles - Moronic Poker Game.
Posted by CaptiousNut at 1:03 PM

This is getting tiresome, counterproductive and creating a stupid enviornment for the children. BASTA !!
MIL

and CNN spin on above :

I'm getting sick of this story too.

BUT, my ratings go up when I blog it!

Plus, as a matter of full disclosure, you ought to identify yourself as a biased *landlord* - one who had their own remarkable *tenant* dispute.

If memory serves me....that spat of yours with the poor old Pakistani woman was nasty, *tiresome*, AND spanned decades. Plus, you didn't win. :)

It's okay though. If you started *approving* of what I do....you'd cease to be a genuine MIL.

Great to hear about the increase in blog activity !
MIL

Sweet old Palestinian (not Pakastani)lady alive and well and plotting conspiracies from rent-free apt in NYC.