No System, No Marketplace, No Clue 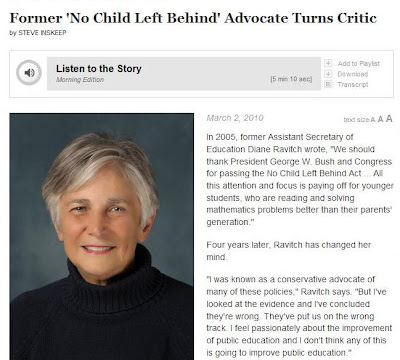 Check out this blithering Moron:

In 2005, former Assistant Secretary of Education Diane Ravitch wrote, "We should thank President George W. Bush and Congress for passing the No Child Left Behind Act ... All this attention and focus is paying off for younger students, who are reading and solving mathematics problems better than their parents' generation."

"I was known as a conservative advocate of many of these policies," Ravitch says. "But I've looked at the evidence and I've concluded they're wrong. They've put us on the wrong track. I feel passionately about the improvement of public education and I don't think any of this is going to improve public education."

She says one of her biggest concerns is the way the law requires school districts to use standardized testing.

"The basic strategy is measuring and punishing," Ravitch says of No Child Left Behind. "And it turns out as a result of putting so much emphasis on the test scores, there's a lot of cheating going on, there's a lot of gaming the system. Instead of raising standards it's actually lowered standards because many states have 'dumbed down' their tests or changed the scoring of their tests to say that more kids are passing than actually are."

Some states contend that 80 to 90 percent of their children are proficient readers and have math proficiency as well, Ravitch notes. But in the same states, only 25 to 30 of the children test at a proficient level on national tests such as the National Assessment of Educational Progress.

Okay. She pushed the Federal standardization that is NCLB, realized it was a mistake, and is sort of repenting.

I certainly agree that it was a disaster in principle and in application.

But here's where the Moron manifests:

'There Should Not Be An Education Marketplace'

Part of the reason schools were so intent on achieving high tests scores was because they were competing with other schools for resources, which were often doled out on that basis alone.

Ravitch is critical of the impact this had on schools.

"There should not be an education marketplace, there should not be competition," Ravitch says. "Schools operate fundamentally — or should operate — like families. The fundamental principle by which education proceeds is collaboration. Teachers are supposed to share what works; schools are supposed to get together and talk about what's [been successful] for them. They're not supposed to hide their trade secrets and have a survival of the fittest competition with the school down the block."

So she's, now anyway, against Federal standards/testing/funding(?) but also against an *education marketplace*?

Honey, it's either one system or an open COMPETITIVE marketplace. It can't be both and it can't be neither!

Though, in fairness, I think she's confusing differing objects of competition. It was the schools as political entities that were competing for Federal funds and Federal approval in the old system.

She's probably still very much FOR the continued, wasteful and ineffective, Federal subsidization of *schools*....she just doesn't want individual states and towns to be held accountable for their results. She wants blank checks. That's what George Bush was ham-handedly trying to attack in the first place. Unfortunately he hadn't the wisdom, imagination, or stones to kick education completely back to the States.

I don't know why, and I'm sure I'm not the only one, but when I hear high-level bureaucrats like this Ravitch utter such complete nonsense my blood boils over. I'd like to punch her in the face! (kidding)

No earrings on this broad - read into that what you will. But there are most certainly several other holes in her dome.

(Recall that No Child Left Behind was authored by Ted Kennedy and had more Democrats supporting it than Republicans! See - prior post.)
Posted by CaptiousNut at 11:35 PM

Can a child belong to more than one family at once? Can the Federal Family learn to share?


As for punching her in the face... I say go for it. Why should these absurd, violent concepts be met with reasoned argument, which the violent socialist interventionist will always ignore?