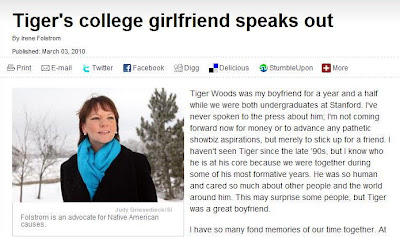 Recall that golfer Tiger Woods is currently embroiled in a *serial infidelity situation* with his wife/nanny.

His college girlfriend, of over a decade ago, felt inclined to defend the hound. All I can say is....that this whole thing was freakin' WEIRD.

Tiger Woods was my boyfriend for a year and a half while we were both undergraduates at Stanford. I've never spoken to the press about him; I'm not coming forward now for money or to advance any pathetic showbiz aspirations, but merely to stick up for a friend....He was so human and cared so much about other people and the world around him. This may surprise some people, but Tiger was a great boyfriend.

Our relationship ended when Tiger turned pro after his sophomore year. Becoming the first person in my family to earn a college degree was so important to me that I wasn’t willing to give up my studies to follow him. Like everyone else, I was shocked by the revelations about his infidelities. The Tiger I knew was loyal, devoted and self-?controlled. I’m not naive, but I can say with certainty that he was faithful during the time we dated. The speculation that he's being treated for sex addiction is surprising because we enjoyed a normal sexual relationship.

I mean, who among us won't admit to being a *stupid kid* back in those days.

This dingbat broad can *say with certainty* that Tiger was faithful to her?

Yeah, ask any girlfriend or wife on the planet, most of them are likewise certain they aren't being cheated on either. Extending her logic, MEN ARE MONOGAMOUS the world over!

I'm not doing a good job here explaining what's so off with this article, this admission. Somebody help me out.

Of course Eldrick wasn't exactly a stud in college either. Golfers hardly have groupies until they make some cash on the PGA Tour. By all accounts, Tiger was an adolescent dork - as most prodigy golf kids are. It's really a game for mature men.

More evidence that Tiger was a collegiate geek is....well, the fact that he dated this dippy, unsightly broad in the first place! Today, after Tiger's a centi-millionaire, she wouldn't have a chance with him next to the p0rn stars and high-end call girls that he connects with.

It's either that, that Tiger dated now *advocate for Native American causes* because he was a loser and had limited options back in the day...

Or, any second now 5 other co-eds from Stanford are going to come out and claim they were diddling Tiger while he was *faithful* to Irene Folstrom!

And how darn funny would that be?! 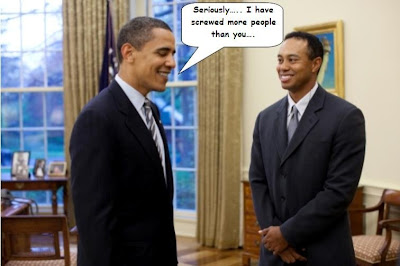 My last couple of Tiger posts:

Win Some, Lose Some
Posted by CaptiousNut at 8:27 PM