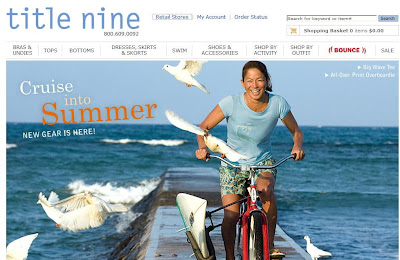 My wife received a *catalog* in the mail the other day from Title Nine - some upstart women's clothing chain, I guess.

She liked the look of the merchandise but is disappointed that she can't go locally to a store to try the stuff on.

Me? I'm disappointed in the *name*. "Title Nine" is a clear misnomer.

Title IX refers to a federal law - one that is essentially welfare for female athletes at subsidized institutions. It's why colleges have to spend 100k a year on *female crew* coaches and whatnot.

But the insinuation that in the *clothing department* women are somehow under-served, I find that ludicrous.

Rightfully, they should open a MEN'S clothing store called *Title Nine*.
Posted by CaptiousNut at 1:30 PM