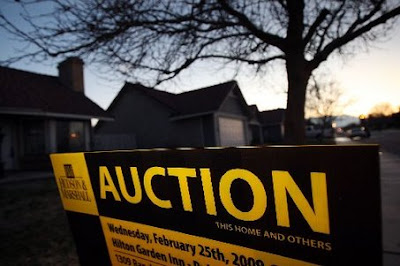 So this week, not only was the house I rent scheduled to be auctioned off....but that criminal deadbeat landlord of mine had summoned me into court for *non-payment* of March rent and/or eviction.

I called the bank on Monday - the auction was still on. And I called again the day before the sale - auction still on.

My wife and I arrive at Quincy district court the other day. She had to take a day off from work. AND we had to pay someone to watch our kids to deal with this BS. (Even more of an imposition, was the fact that I had to put on non-jeans and a sport-jacket!)

At 10am, we piled into a courtroom with a bunch of criminals(!) not knowing at all how this process works. I looked around, and there was no sign of the Moron. Ten minutes later, he was still not there!

Pleasant thoughts are streaming through my head, "maybe he won't show!" - but I smother them.

As our names were called, two clown attorneys in front raised their hand - apparently they were going to represent him in absentia. "Is this even permitted?", I wondered.

The court clerk guy (magistrate?) offers *mediation* to us, and the attorneys accept.

WTBleep was going on here? There's nothing to mediate! He filed a motion to resurrect his previous eviction attempt. I was pretty sure that a judge might throw out his motion on procedural grounds. I wanted to see a judge - if a judge told me I had to pay March rent even though the house was being foreclosed, and even though this dimwit already had my last month's rent (plus another $1200 that he owed me), then so be it.

But all this happened so fast. The next thing I know, I was whisked away into a room with these incompetent attorneys, two court mediators, and some observer (a youngish chick who, well, let's just say had trouble IMPARTIALLY not-laughing at some of my outbursts).

We go in there, and after a long preamble from the mediators about confidentiality, etc., they open up the session.

The lead hack attorney looks at me and says what do you want?

And then it got bad. Real bad. I was as fired up as I've ever been. I described my landlord as a *criminal deadbeat* and his attorney started waving his finger at me, calling me *unreasonable* and *uneducated*; he said I was engaging in *defamation*.

CaptiousNut - Why do I have to pay rent when the house is getting auctioned off TODAY and when even after not paying for March, my landlord still owes me money???

CaptiousNut - I called yesterday and they said the auction was on. That's all the information I have to go on.

CaptiousNut - What? Did he do a midnight bankruptcy declaration or something?

I was incensed. Not only should I not have even been at the courthouse. My friggin' landlord doesn't even show up and he sends this hack attorney in to represent a case he knows nothing about.

CaptiousNut - I FEEL LIKE I SHOULDN'T EVEN BE HERE. THIS WAS A TRUMPED UP MOTION. HE'S TRYING TO VACATE A PRIOR DISMISSAL - ONE OF WHICH I HONORED ALL THE TERMS.

CaptiousNut - I start to read off ALL 2 bullet points - 'That we pay him February rent and that he considers the return of our security deposit to be January rent.'

HackAttorney - Can I see that? (pointing to the paper)

CaptiousNut - No. What? IT'S RIGHT THERE IN THE COMPLAINT YOUR CLIENT FILED AGAINST ME....(to everyone else) OH MY GOSH, HE DIDN'T EVEN TAKE A GLANCE AT HIS OWN CASE!

CaptiousNut - I'M WASTING MY TIME HERE....A JUDGE MIGHT THROW OUT THIS ENTIRE MOTION BECAUSE IT IS PROCEDURALLY INCORRECT. WHY SHOULD I MAKE ANY DEAL HERE?

Mind you, my wife is kicking the $hit out of me under the table. When I say I was fired up, I mean as much as I've ever been - nostrils steaming, etc. She'll attest to that.

At that point, the mediators suggested that they meet with us separately.

What a colossal waste of time! I needed to get before a judge and who knows how long that would take after this detour now. I should have rejected their request for mediation right off the bat. I didn't because, admittedly, it took me by complete surprise.

At this point, my idiot landlord shows up. I see him out in the hall in a $1,000 suit, loudly yapping on his cell phone like he was....well, not a guy who just declared bankrupcy. Only the mediators won't let him in. They say that since he wasn't there to start, he can't join in now.

We went first with the mediators. But I couldn't come up with an *offer* for them.

So my wife said, "Tell them to pay us the interest on our last month deposit and the water bill that they owe us." (The mediators scribbled it down.)

I scoffed. "That's not an offer....They are suing us for MONEY and to EVICT us. They aren't going to go for that."

The whole thing was ridiculous. We left the room and I steamed out in the hallway - I had to walk as far away from my bleepin' landlord as possible! 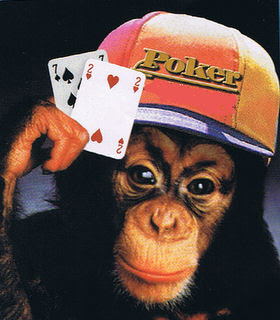 Ten minutes later we went back in.

Mediator - They are offering to pay you the $1,200 they owe you today, and accept March rent as paid (via pre-paid last month), so long as you move out by the end of the month (that's in less than a week).

So they went from suing me for money....to offering to PAY US money.

I guess the attorney was scared that his motion would be thrown out by the judge.

I guess all my screaming and fuming (that my wife scolded me for) paid some dividends.

My wife and I had to discuss this for a moment. "Tell them we want to stay until the end of May", we asserted.

Now my head was really spinning....I figured they were going to come back and say they'd give us until the end of April to get out; I figured they'd midpoint the negotiation.

But the Morons didn't. I felt like I was a sober person playing poker with a bunch of drunken monkeys...

So we were made financially *whole* - we have all our money back now. And we get to stay AT LEAST another two months if we want to.

But I was still most displeased.

At this point, after all this harassment, legal and otherwise, I deserved to better than *even*. Or, at least my landlord deserved to be in the *negative*. I really should have resisted the mediation and gotten a judge to throw the whole thing out. Almost everyone thinks that I won but they are only right to an extent. I, an amateur attorney, may have shot even par and won the tournament....but I very easily could have shot 5 under.

Heck, I offered an even better deal to my scumbag landlord two weeks ago and he wouldn't even respond. So he endured the hassle of court and paid an attorney to get a WORSE outcome!

I'm going to continue fighting and torturing the Moron. He's crossed the line with me too many times; he's simply got to pay. I got him cited by the Board of Health for rodents, septic issues, etc. last week. Of course he hasn't done anything about that - so I have grounds to withhold rent - though I won't for April.

My wife consoled me...."We'll just stiff him for May rent. We'll stiff him on the way out."

Note the new auction date is scheduled for mid-May. So y'all can expect a sequel to this tale in about two months; expect him to take me to court again for *nonpayment of rent* while his house is being auctioned off on the front steps. And next time I'm not going to fall for the *mediation* trap.

Sidenote - the auctioneer did show up the other day for an auction that was cancelled. He told my wife that he had a minimum of *what was owed on the house*. Well, the house is worth less than 50% of that figure. So the bank was prepared to *buyback* its property; and unprepared to take the capital loss on its books, still.
Posted by CaptiousNut at 9:34 PM