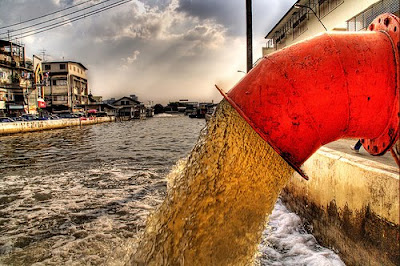 Is it wrong that I got a big kick out of the overflow of a local water treatment plant amid the flooding of the past few days?

QUINCY — About 15 million gallons of untreated wastewater was diverted into Quincy Bay on Monday in an effort to keep sewage from backing up into homes and flooding the Nut Island sewage facility, Massachusetts Water Resources Authority officials said.

Twice on Monday workers redirected the plant’s surging inflow of rain and sewer water into the ocean through a discharge spout a half-mile off the city’s shore.

Frederick Laskey, executive director of the MWRA, said the first "controlled bypass" was ordered about 1 p.m. after sewage overflowed a pumping station in Houghs Neck and "came over the floorboards" at the Nut Island facility.

"It would have flooded Houghs Neck and Island Avenue," Laskey said. "Eventually, we would have backed up all the way to East Milton Square.”

"This is the storm from hell," he added.

Hah! I love how they call poop soup or raw sewage...."untreated wastewater"!

I wouldn't direct my untreated wastewater on you if you were on fire! 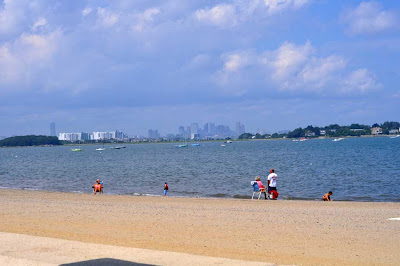 Above is the picturesque Wollaston beach in Quincy. It'd be a nice little beach if it wasn't in the poopy wake of all that untreated wastewater and whatnot. I saw a sign up there this past summer announcing that the *swimming was prohibited* on account of polluted water.

Then an adjacent *mom* informed me that the beach had been *closed* for a full decade when she was growing up (1980s?).

They're just soooooo green here in Boston!
Posted by CaptiousNut at 10:35 PM