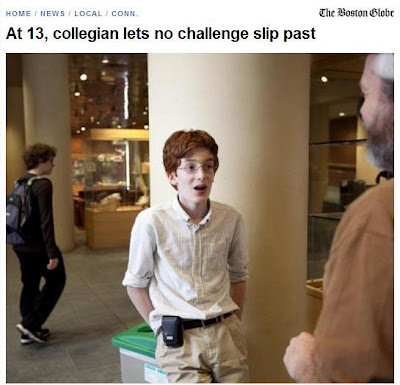 There's an article in today's Boston Globe about some pre-pubescent who attends, and excels, at UConn (or, as my father refers to it..."The University of UConn").

The thrust of the story is that despite his superior academic performance, the school wouldn't let him go on some sponsored trip to South Africa. Whatever.

All I wanted to point out was that the nowhere in the story is the word *homeschooled*. They mention the prodigy's age and what he's doing now, but don't dare source how he go there educationally.

I'm quite positive if this kid had gone on a shooting rampage....that the term *homeschooled* would have been utilized 10 times!

Thanks to Mrs. Private Caller for alerting me to this one.

See my earlier example - "Homeschooling" Censored At The Boston Globe.
Posted by CaptiousNut at 10:16 AM

The comments are CLASSIC. Are you reading them?

Why is everyone so obsessed with "socialization"? This is a typical commie copout when you point out how bad the education systems does at... its namesake. They go, "oh yeah, well... how else will kids get SOCIALIZED?"

These commies always want to have their cake and eat it, too. They want their education system to be all things to all people and they don't want anyone to complain about how expensive it is, neither.

I did read a few and noticed the same ridiculous theme.

In fact I have yet another post on that *socialization* topic on deck.

i prefer this guy's assessment of the kid.