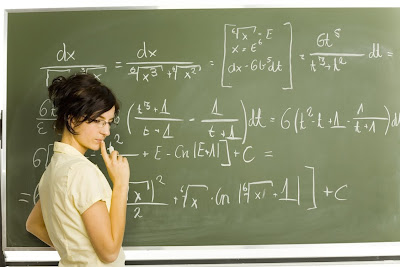 It was an interesting piece and worth a few minutes of your time. I won't summarize it beyond saying that someone did an experiment decades ago where they delayed teaching math until 6th grade. It turns out, that within a year of normal math instruction, these students had caught up to their peers who'd been studying math since kindergarten.

This evidence supports the tack of the Sudbury Valley School. There I believe the head honcho teaches all of K-12 math to his willing pupils within a matter of weeks - when they are 15-17 years of age.

But I fear that the *case for teaching less math in schools* could easily be misinterpreted. Just because age-graded, government schools, as they are currently staffed and run, do a poor job of imparting mathematical knowledge....that doesn't mean the subject ought to be eliminated or de-emphasized. If anything, it's more evidence that government schools shouldn't have ANY students under their care in the first place!

I do agree that the K-12 math curriculum is so small that it can be digested rather easily. AND, I've just about proved it - with my 5.28 year old son going from *counting* to 7th grade *algebra* in only about 1.5 years.

Next they'll be saying, "Because an inept Big Government can't get drugs off the streets....we ought to just legalize them."

Actually, the argument for legalizing drugs is they should never have been illegal in the first place-- vices are not crimes. There is no justice in threatening people with force and/or imprisoning them simply for exchanging goods and ingesting prohibited substances. There is literally no difference between putting someone in prison for ingesting "too much salt" vs. putting someone in prison for ingesting "too many drugs".

Eh, nevermind though, you wouldn't want to let consistent principles get in the way of your desire to see your children protected from harmful substances-- even though, as a parent, you must have realized by now that's YOUR JOB not society's!

I'm all for legalizing drugs as long as I don't have to pay for the health care associated with these bad decisions (e.g., rehab, liver transplant, lung transplant, etc).

And yes this applies to smoking and alcoholism.

ps. Don't bother responding to my point that enforcing drug laws isn't a free option... you have nothing and I wouldn't expect you to actually be capable of thinking hard enough to realize how many millions of times you've already contradicted yourself just by opening your stupid mouth one time.

Haha what a dope you are! Drugs illegal = nobody ever gets hurt by drugs and therefore you don't pay for their drug abuse via socialized medicine. Drugs legal = everyone suddenly ODs on drugs and you pay enormous bills.

You're a gentleman, and a scholar!