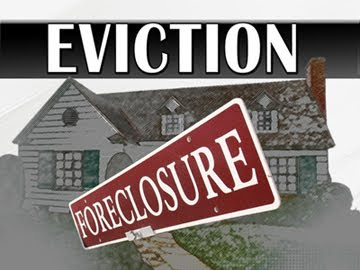 With my house scheduled to be auctioned off next week...

On that very same morning, I have to appear in court - my landlord has filed a motion to *vacate* the dismissal from his last attempt to evict/rob from me!

Given a public notice to foreclose on the house I rent, I told my landlord that March was my *last month*. In other words, I wasn't going to pay rent to him and have my pre-paid last month get blown into the wind. Realize that post-auction, I'd have a new landlord, one who'd be looking to collect rent from me April 1st. One who'd be indifferent to the fact that my prior landlord robbed me.

There's a bit more to the strategy here, but I'm going to omit that for the time being. It suffices to say that I have to appear in court next week.

At first, I didn't know what the *notice* he served me with was. I had thought it was a *summary for eviction* but it wasn't. It is a motion to throw out our prior agreement - where he agreed to consider my January rent paid by the legal return of my security deposit. Why does he want it *vacated*? Because this will allow him to accelerate the eviction process. It will allow him to get a court date quicker - I believe.

As far as I can tell, if he wins the motion, I'll get a day in court to make my case.

But if he loses, he has to start the process over again, and do it correctly.

I don't know, and couldn't find out, the specifics of this legal procedure. I think he may have *procedural* issues with what he did. For one thing, there seems to be some statute of limitations on vacating dismissals - ten days or something (he's at like day 30). Secondly, the only stipulation of the agreement we signed back in early February was that I pay him the $2,500 of February rent. That I did with a check and thus can't be contested.

This Moron articulated something to the effect in his complaint that my signing that agreement, I agreed to pay him rent going forward. Say what?

Another issue entirely came up....like the house being repossessed!

But I don't know the law. Perhaps two *Notices to Quit*, regardless of whether or not they are legit grant a landlord an expedited eviction process. It certainly seems like my Moron is attempting an *end-around* due process. I know. Restrain your SHOCK.

The lawyer I consulted warned me that the Court is a *zoo* and that I could get some idiotic judge who, for whatever reason, rules in my landlord's favor. And while though the motion is nominally to *vacate* a prior dismissal, in the complaint he's also asking the Court for *possession*. So in the unlikely case that I lose and some loony judge grants hims possession....I'd have maybe 10-12 days to pack up.

I will be representing myself in court next week - which invokes that old saw, that I have a Moron for my lawyer and my lawyer has a Moron for a client!

(Don't forget, he's probably going to declare personal bankruptcy a couple days before my court date. Next week certainly is *crunchtime*.)
Posted by CaptiousNut at 7:19 PM