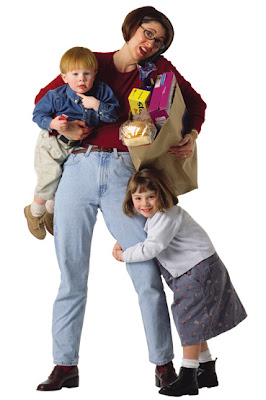 But we know dozens of people out here on Boston's South Shore, financial types, salespeople, and consultants, who have some real brutal work schedules. My wife may be on the train before 6am each morning, but she gets home usually by 6:30pm, she's permitted to work Fridays from home, and travels only once per every two months. And even then, her travel is to nearby Manhattan or New Jersey - and sometimes only day-trips on the *Shuttle*.

I know a few people who regularly have to go to China, India, or South Africa for 7-10 days at a time. As far as I'm concerned, that's gotta really suck, not just for the worker, but especially for the abandoned spouse and children at home.

Recently I heard the worst gig yet. One of my wife's friends, her husband is on a 6 month contract on the west coast. Throughout this period, he's only going to be home ONE WEEKEND PER MONTH. Ouch!

Note they have two small children, just like we do.

I don't think that's entirely true. I think the reason is inertia and pure ignorance. People get sucked into career paths like these and just keep on chugging. They work so much they haven't any time or energy to contemplate the boundaries of their wasted lives. If they're going to work that hard and sacrifice so much there ought to be a long-term exit strategy.

One of the things that kills me it the effort disparity between wage slavery and parenting. These Morons will spend 40,50, or 60 hours a week slaving for *the man* and Big Government. Yet they won't so much as spend one hour per week *working* on the education of their children. Merely offer them a book to read on schooling and they stiff arm, "I'm not interested."
Posted by CaptiousNut at 9:27 AM

C-Nut, that irks me about the parents not spending that ed-time with their kids. I am old enough to have witnessed nearly the entire destruction of our educational system. On the whole, we are turning out some of the dumbest kids in history. I am surprised most of them have teeth even.

I also think it's not a question of parents wanting to spend the time learning with and teaching their kids BUT they just don't have the time to do so.

They don't spend ANY time because to do a little work would admit personal responsibility in this sphere.

No, it's far better, neater intellectually, to *outsource* and thus wash one's hands of the entire educational process.

Not everybody is as spoiled as you are. Travel pays, and many jobs require a lot of it. People that believe financial security is important for their children are no different than those Mr. Mom types that are fortunate enough to evade the typical burdens of existence.

C-Nut, you are with your crumb-crunchers all the time. Is there a minute of your day that they are not actively learning and mimicking your behavior?

I spent a couple of hours yesterday with some folks where their middle daughter is supposedly the model for good mothering. It made me ill. The middle daughter's kids behaved like bears with furniture. It will take YEARS of failure as adults for those kids to amount to anything.

There's no argument here that *travel pays* - it can pay quite a bit.

My son is 5 and doing 7th grade math already. Before leaving my care he and his sister will be neck-deep in entrepreneurialism and *work*. Their financial security will be far greater than that of their age-mates.

But that's only part of the picture - what good is money (from daddy!) if one is a self-centered a$$hole, right?

Yeah, I am spoiled a bit - but much of that is by design. My wife is a finance executive who's had plenty of opportunities. Anything that would change our lifestyle, even far more lucrative positions, has been removed from consideration. And I stuck with trading for so long because way back when I started, I marvelled at the older guys who traded online (or over the phone) from their mountain cabins and Floridian condos.

It does seemingly cost a lot of money just to make ends meet; I've blogged that.

But still the vast majority of people I know spend 98-110% of their annual income. In other words I know very few people living beneath their means. Thus I conclude that most people who work long hours in far-off places do so out of inertia and a lack of consideration - rather than out of thoughtful design.

The mimicry isn't so pronounced as they age a little.

Although, I do oftern hear my daughter scolding her dolls with the same choice words I wield on her!