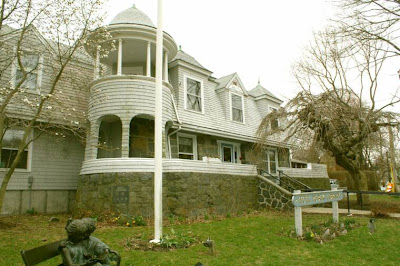 Recently I entered the Hingham Public Library. Attached to the door was an *Attention Hull residents* note. It informed the nearby town that they were no longer allowed to borrow library resources (i.e. books). Hull (home of Nantasket beach) had been booted out of the Old Colony Library Network!

Because that town cut it's own library funding 57% this year - a cut that was deemed by librarian fascists to be *disproportionate* to other municipal cuts.

I kind of side with the fascists here. If a member of a club doesn't pull its weight, it should be expelled.

I'm not sure what happened exactly, but I know that often politicians strategically put sentimental expenditures like libraries, teachers, and HS sports on the chopping block to scare voters into opting for *tax override* increases.

Only the residents of Hull didn't take the bait this time.

For those of you unaware, Hull is a blue-collar town with average household income tax filings around 55k. Meanwhile Hingham's average income is more than double that - it's yuppie-ville. So with the library ban, snob appeal has been codified a bit. Might it set off a local skirmish?

The town manager told selectmen that he reminded the Hingham trustees, "When the Town of Hingham came to Hull and asked for access to our sewer system — thereby the Town of Hingham avoiding several million dollars worth of debt cost associated with building a sewer system — the Town of Hull allowed them into our sewer system. So, you know, we played pretty reciprocal with that community over time, and this was just unfortunate, because there’s no savings; they’re not reducing their budget because they’ve lost 7 percent of their customer base."

Well, it's little if you don't live in Hull anyway. I know one particular homeschooler from there who is extremely upset. Libraries are the life-blood of our kind who educate their own.

Consider on that particular day last week when I came upon that *Attention Hull residents* sign....my family took out no less than 25 books from the library - and that might only last us a week.

If I lived in Hull I'd be willing to pay probably $200 a year, perhaps more, for the right to borrow books in the Old Colony Library Network. I say it's high time they consider going the *privatization* and *user-fee* route.

Addendum - Just to illustrate how messed up, how profoundly stupid these politicians are....So on one hand Hull is slashing it's annual library budget from $275,000 down to $100,000 AND they are getting *decertified* by the local network. Meanwhile, they are forging ahead with plans to build a new $6.2 million dollar library! They've already purchased the land!
Posted by CaptiousNut at 7:15 AM

I thought this article would be in your wheel house. Its about textbooks in public schools...

That bit about Reagan at the beginning of it was astounding - but nonetheless totally expected.