The Disease Of Extreme Outsourcing 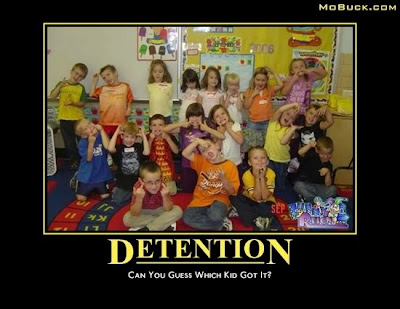 The other day I was waxing on parental discipline:

I'm really big on *listening*. If I tell the Prince or the Princess to do something and they defy me....there are going to be serious consequences. I was at a park today with someone who threatened their brat with *leaving* no less than 25 times. With such a spotty record on *follow through*, would he or would he not have to be an absolute Moron to take anything his mother ever said seriously?

Okay. Let's just say this child who routinely gets 25 chances from *mom*....let's just say that he happens to be the most disrespectful, by far, 5 year old brat that I personally know. He's belligerent with every single person he comes into contact with. He hits reflexively; talks back; he even goes out of his way to antagonize others. He'll think nothing of coming right up to me, an extra-familial adult, and smacking me on the arm or mouthing off.

His *dad* is a ghost and his *mom* is a certifiable wimp.

I do realize that some kids can be innately more difficult than others (I was!). And I do realize that not every parent has it in them to enforce manners and discipline. But still, this kid is so bad that he (and his mother) are already being ostracized by their peers - it's going to be a LONG 12 years in government school! And unfortunately, *mom* has decided, instead of digesting the empiricism of her rotten son, to lash out and become defensive. Who could possibly think themselves a bad horrible parent, right?

Nonetheless, she is. It's so bad that I have contemplated doing an *intervention*. Who cares if I piss her off and lose a friend if it has a slight chance of mitigating this *child abuse*, right?

I was jawboning my *intervention* idea to another parent, actually a community center employee, the other day who informed me of the following lunacy:

OtherParent - Well, she's trying real hard to get him (brat) into a behavioral disorder program at school.

OtherParent - She says she's tried *time outs* and everything but they don't work...

Can you freakin' believe this?

It's bad enough that parents outsource the intellectual development of their children to government agents...

But this clueless *mom* is consciously and deliberately trying to outsource basic discipline!

A mother like this would never so eagerly defer her responsibilities to the government in 1950 - I don't think so anyway.

See also - Complete Book Review - Hold On To Your Kids.
Posted by CaptiousNut at 10:45 AM

I do realize that you city dwellers are more genteel than us Southern rubes, but dang, there is a point where parents have to snatch a knot on their kid's head, right?

Southern anecdote: I once asked a mother in our local Wal*Mart if she needed some assistance with her child.

She replied, "Whatever do you mean?"

I aspire to use that line a hundred times in the not too distant future.

And I won't feel bad since you borrowed my *baby seal killer* pic...