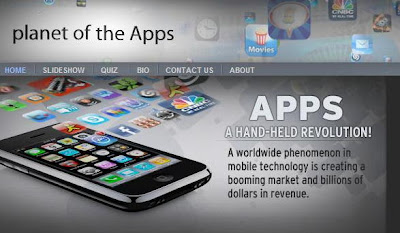 I've tried to educate myself a bit on those smartphone *apps*. I just read CNBC's Planet of the Apps; I looked at the Top 10 selling apps of 2009; and I even tested my apps knowledge ignorance on their little quiz...

But I still don't *get* apps. Beyond a phone, email, and the internet I just don't see what else I could possibly NEED.

Sure, others may *need* apps because they have nothing else going on - but I sure don't have time to spare. (Though that golf GPS app seems tempting!) Are modern day earthlings just addicted to gadgets or something? Are they wholly incapable of entertaining themselves? Can they not bear to be alone with their thoughts - OR, God forbid, be alone with THE PEOPLE THEY ARE PHYSICALLY WITH AT THE MOMENT?

What frustrates me here, is not so much all these Morons and their *cool* apps....it's that I can't for the life of me figure out the phenomenon.

Maybe my obtuseness on this front is strictly a function of me aging - of me rapidly approaching 'old coothoot'? Though I was carded at a bar two weeks ago, I will be a ripe 36 years young in three months' time.

In a sense, I feel like that typical fossil in the mid-nineties yammering, "Now what the heck would I ever want or need a cell phone for?!?!?!"

Of course, there is the real possibility that I am not too old and farty to *get* apps.

There a chance that this is some frivolous fad up there with acid washed jeans, jams, and middle parts with feathered hair...

From a different article, the pro-argument seems more palatable:

"Today's mobile phones are as powerful as many desktop PCs - more so, if you consider that they're also location-aware and have a built-in billing and payment system," said Lisa Allen, a board director of Mobile Monday Mid-Atlantic, the local chapter of a global group that aims to foster education and networking among the mobile-development crowd.

Not all apps are frivolous. Most of mine are work related-drug reference, antibiotic guide, medical calculators, etc. Then again I downloaded a couple non-work related that I pretty much never use(at least they were free)

So I guess I'm less of an old coot than you even though you're chronologically younger ;)

I'm the same way at C-Nut, most of the apps have no applicable use in my life, but my friends with iPhones have some of the most useless junk I have ever seen. Who in the world would need an app to tell them what particular song was playing?

I remember my sister, a dermatology PA, telling me a few years ago that she uses her *Palm Pilot* to aid in diagnoses and treatment. I, and others, sort of laughed at that. I mean couldn't a patient wonder, "What....they don't know this stuff inside and out? They have to look it up???"

But I'm not against the use of technology in medical treatment by any stretch. In my rejection of modern medicine, I've found soooooo much more good info: treatment, diagnostics, etc. from testimonials on the web. In other words, I use Google too!

Right on. All you need to do is catch a slight phrase....and then Google it. I've done it a hundred times myself. No *App* is needed.