Art From My Butt 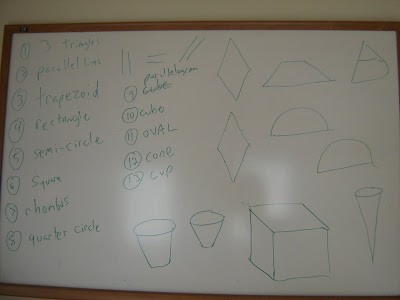 That was today's *drawing* session.

I've decided to incorporate sketching into our daily homeschool regimen - even though I myself can barely churn out legible handwriting!

The 5.00 year old Prince has already learned his shapes in those Kumon geometry books, so I figure a little side-door reinforcement can only help.

My son's assignment was to draw each of the figures on the list; and he did so with rapt enthusiasm and only a modicum of coaching. Almost everything now seems fun and easy after the torturous long division of decimals!

"You want to draw SpongeBob?"

"Well we're going to first have to sketch a square, and then two parallelograms attached to it..."

Though first, we had to learn how to draw parallel lines, congruent line segments, etc.

I'm no artist by any stretch. But I do remember from my youth, that there were a few things that I could sketch a bit. And those few things were what I drew over and over again as no doubt a mask for my incompetence.

After contemplating art a bit recently, I've come to see its importance as a PARTICIPATORY endeavor. Any big mouthed Moron can stare at a picture and wax provoked...just like any fat slob can second guess a play-call on his television - but that doesn't make him an athlete!

One thing that appeals to me about these *lessons* is that teaching kids to draw is progressive - not at all unlike going from the alphabet to composition or from finger counting to combinations and permutations. They really just need to learn the building blocks, practice a bit, and accept nudges from sagacious adults.

So how to go about getting my brood climbing the art learning curve?

Which would only leave insourcing, to the aforementioned art-tarded parent(s).

I submit that educators have only a small chance of imbuing a child with enthusiasm for a subject that they themselves don't manifestly love.

In other words, how could I ever convince my kids of the importance of art if they have never witnessed Dad wielding chalk on a blank slate?

So I've made a point to sit down with them, and their crayons, and get about teaching AND learning. 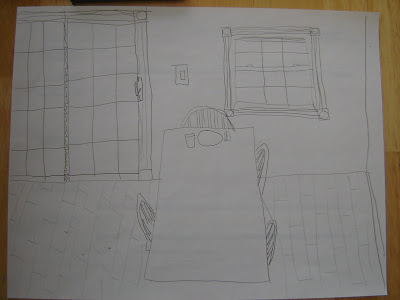 Don't laugh at, well, probably my first sketch in the past 20 years.

My kids thought it was awesome....wicked awesome!

There are a ton of resources out there that, obviously, I will have to tap down the road.

And who knows, maybe I'll discover that there really was a flamboyant little artist in me - one that was suppressed by inferior methods of instruction?
Posted by CaptiousNut at 10:26 PM

As someone that draws for a living, your scale is not too bad, but the perspective is lacking. Here's a link to help out a little. With a little practice, it becomes second nature in a very short period of time.

Thanks. Will revisit as our work progresses.

You draw for a living?

I thought you were a *shoe mogul*?

Naw, I am a building/home designer. My state senator owns a shoe store though. Maybe he'll get those barefoot scofflaws off the road.

You know your in the Boston area when you say "wicked" when referring to anything good.

It's hard to find good resources for teaching drawing to kids. Most art for kids is about open-ended creativity, with maybe a sentence or two about perspective thrown in. Which is why no one knows how to draw anymore, whereas it used to be part of a basic education. I think Waldorf schools still do some traditional drawing. Dover Publishing has a ton of reprinted art manuals. Not for kids obviously, but a good resource for anyone teaching drawing academically. I've been meaning to figure out which one to buy so that I can learn how to draw.

Amazon actually has a perspective grid source book where you can just place a piece of tracing paper over the grids, too. I have the book somewhere, but I cannot seem to find it right now.

Megan, it makes me very happy that there exists one person in the world that wants to learn that art.

That really is a remarkable piece of work.Thank goodness you left out the mice...... MIL

That *wicked* was a jest!

My son, at age 5.00, has already been to nearly every state on the eastern seaboard.

I do in fact remember what you do for a living (designing *green* buildings!) when you aren't tailgating.

I was just working a clever *mogul* joke in there.

Tomorrow, I will have the kids sketch the rotting mice. Thanks for the suggestion!

I discovered one highly recommended *classical* drawing book a few months ago. Will try to dig out its name.